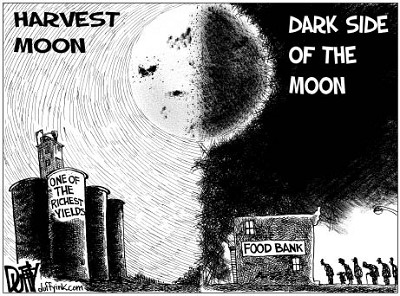 Another yellow leaf rises up toward us, wingless and riding the bluff-climbing breeze where the James and Tye Rivers meet. The James River State Park's signature overlook provides this bird's-eye view of the rivers and, westward, the first wave of Blue Ridge Mountains, including the peak of the Priest, splashing highest.

Leaf after leaf has been falling first from the riverbank's trees below us before some few of them ascend, catching the movement of air perfectly.

This golden leaf flutters ever upward, closer and closer, and is suddenly seen transformed into what it really is-a monarch butterfly wending its way to its winter home among the Oyamel fir trees in Mexico.

Two thousand and five hundred heart-stopping miles later, this fragile creature will go into hibernation after safely arriving, its heart rate slowing like a hibernating mammal sleeping through winter before returning next spring.

The sky through which the butterfly skims is the shade of blue that a child would imagine. Only October skies have such resonance, the blue so deep you feel as if you could swim in it were you to follow the example of leaves and butterflies, sending ripples in search of clouds that don't exist.

The monarch butterfly is now well above the treetops along the rim of the river bluff, its orange and black markings reminding us of a tiger, if tigers had dreams that gave them wings and if such dreams came true.

A tiger would fly invulnerable to danger above James River State Park. A butterfly, however, seems the most vulnerable creature in the world around us, a world into which a large hawk now rises upon the same up-drafting breeze, hawk and butterfly within feet of one another.

There is a sudden panic fear that the moment of visual grace may conclude with the hawk tearing the monarch butterfly away from its life. The sight of the two creatures flying in such proximity is astonishing and our feelings for this moment in our lives hangs in the balance.

The hawk flies, disinterested in butterflies.

The butterfly continues, answering the call of fir trees and a winter of summer dreams.