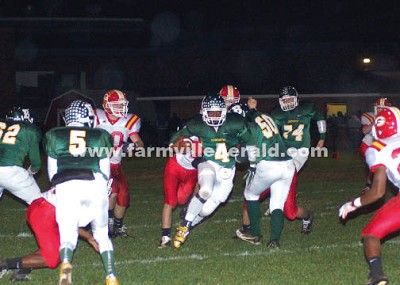 BUCKINGHAM – A fast start and a furious finish wasn't enough for the Buckingham County High School football team Friday night, as the Knights fell to Goochland 26-24 in a battle of two of the top three teams in the James River District.

Helped by Kenneth Johnson's 90-yard return of the opening kickoff, and a second touchdown moments later after a squib-turned-onside kick, gave the Knights a 12-0 lead.

Capitalizing on big plays here and there, Goochland held a 13-12 lead at the half, and extended it to 26-12, before Buckingham closed the game with two late touchdowns to get to within striking distance.

Down 26-12, Tarian Ayers capped a drive with 4:37 remaining to pull the Knights to within one score at 26-18. The extra point attempt failed, but the Knights regained possession and scored on a Kyree Koonce seven-yard touchdown run with 1:26 left.

Koonce was stopped just short of the goal line on the two-point attempt, and Goochland recovered the onside kick attempt to stave off the Knights' comeback attempt.

“There were so many things that we didn't do,” said BCHS head coach Craig Gill. “We played well, but at this point of the season, and into the playoffs, every team is good, and it comes down to those little things, like the kicking game.”

Buckingham was 0-3 on point after touchdown kicks, and had issues with punting as well.

“I was pleased with the way the boys prepared all week. Practice was great, and you could tell that they were into it. We played well enough to win. Goochland is a great team – one of the three best in the state.”

Turnovers at inappropriate times seemed to hurt both teams, but their respective defenses proved to be up to the challenge. Twice in the first half, Buckingham gave the Bulldogs excellent field position, but the Knights' defense turned the Bulldogs away.

Of Goochland's four scoring plays, a 25-yard run in the third quarter was the shortest.

Koonce led the Knights with 85 yards on 14 carries and a touchdown, while Ayers gained 75 yards on 22 carries and scored two touchdowns. Johnson had 46 yards on ten carries, and also scored on the opening kickoff.

“We had 200 yards rushing against them,” said Gill. “Teams haven't done that all year.”

Despite the rainy and cold conditions, Ayers was 11-24 for 159 yards. He completed four passes to Cam Johnson for 65 yards, four to Jesse Hickman for 65 yards and three to Landon Allen for 29 yards.

Tariq Bartee led the Knights defensively with 13 tackles, including two for a loss, while Kenneth Johnson had 8.5 tackles. Devin Smith was credited with five tackles, a forced fumble and a fumble return, while Austin Sea had four tackles.

“They're getting better,” said Gill. “We're still missing Jackson Bryant, and he'll be out for at least one more week, but we hope we can get him back soon.”

Buckingham will wrap up the regular-season at Bluestone on Friday at 7 p.m. The Knights are already assured of a playoff spot as well as a home game.

“I know Bluestone is winless, but they're the biggest team we've faced all year. They have a good running back and a good quarterback. We're going to prepare for them like we've prepared all year.”