Is There A Star Trek In Congress Or Is It Lost In Space? 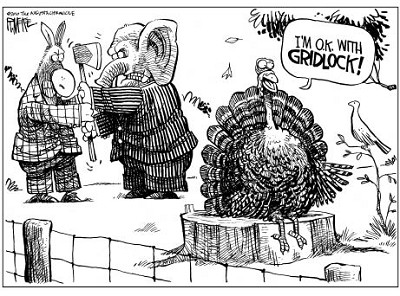 'Has a war been staged for us, complete with weapons and ideology and patriotic drumbeating?'

'Only a fool fights in a burning house.'

'You're setting up conflict where a lot of times, maybe, conflict doesn't need to exist…It's a culture in Washington. It needs to be broken.'

'The forces of darkness are the forces that split, divide, set in opposition. The forces of light unite. Literally, the word 'diabolic' means dividing. The demon divides; the Spirit unites.'

Life Of The Beloved

In the 1968 Star Trek episode 'Day Of The Dove' an alien entity that feeds on hate and violence creates the equivalent of partisan gridlock in space. The being traps 38 crewmembers of the USS Enterprise and 38 Klingons, beamed aboard after their ship is destroyed, inside a portion the Federation ship, which is hurtling out of control toward the edge of the galaxy.

Each side has equal numbers, equal weapons-primitive swords because they are more barbaric-but they cannot be killed. The alien heals all wounds so that the violence may continue for all eternity, feeding it with the energy it needs, the energy of discord.

The only thing that saves the day is dropping all weapons, as if they were words of partisan rhetoric aimed at hacking the political opposition to bits.

“We must talk to Kang, bury the hatchet,” Captain Kirk tells Mr. Spock.

“It is notoriously difficult to arrange a truce with Klingons once blood has been drawn,” Mr. Spock replies.

Or between Republicans and Democrats fighting to control the ship of state.

Dr. McCoy, his mind twisted by the alien, wants nothing more than to annihilate the Klingons. So much for his Hippocratic oath.

In Congress, hypocritical oaths are constantly sworn as both parties condemn the other for actions their own parties embrace.

“Win it,” Dr. McCoy screams to Capt. Kirk and Mr. Spock, as he rushes off toward war.

“We are attempting to end it, doctor, preferably by reason,” Mr. Spock tells him, using words hardly ever seen coming out of our nation's capital.

Once the USS Enterprise crew and the Klingons realize what is happening and stop fighting, stop trying to take control of the ship to defeat the other side, they eventually drive the alien away.

And it seems the alien may have been driven from the USS Enterprise at the edge of the galaxy all the way to Earth and Washington, D.C. where Democrats and Republicans fight to the political death as our, and the world's economy, races along the edges of oblivion.

“Good spirits might make an effective weapon” against the alien entity Mr. Spock had observed, and don't we wish that weapon would be used in Congress by members of both political parties to win bipartisan solutions to turn our ship of state around together.

Contributing mightily to the problem in Congress-feeding on the partisan fervor in both parties to have all the power for itself at whatever cost-is the committee structure. There are separate staff in every committee. One for Republicans. One for Democrats. In combination with the partisan desire for power, the recipe's effect is not unlike the alien entity aboard the USS Enterprise.

Our Fifth District Congressman, Robert Hurt, was aghast when he learned there are separate committee staff for each party. “You go to Washington-I couldn't believe this-they had two separate committee staffs. One for the Republicans and one for the Democrats. Stop and think about that for a second,” the Republican congressman told us. “You've got Republican committee staff that's committed to Republican principles and Democrats committed to Democratic principles. Perhaps all in good faith. But at the same time you're setting up conflict where a lot of times, maybe, conflict doesn't need to exist…It's a culture in Washington. It needs to be broken.”

Why not choose those weapons, instead, before we fly out of the galaxy.

The diabolic demon can be overcome with statesmanship that puts nation ahead of party. And people ahead of political power.