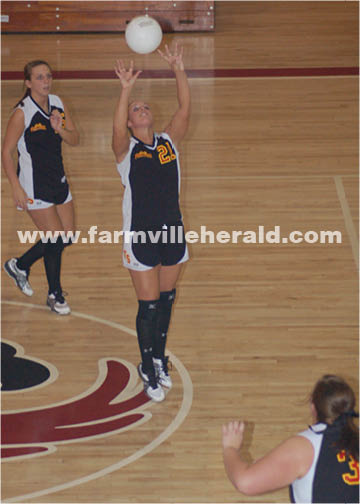 FARMVILLE – The Fuqua School volleyball team did not want to face the embarrassment of hosting the semifinal and final rounds of the Virginia Commonwealth Conference Volleyball Tournament, and not be one of the four teams remaining in the field.

Playing as the No. 2 seed, the Lady Falcons fought through a slow start in their VCC Tournament quarterfinal match against No. 7 Brunswick Academy to take a 3-0 (25-21, 25-18, 25-15) decision over the Lady Vikings and move into Thursday's semifinal round.

“That crossed my mind,” said Fuqua School head volleyball coach Lora Smith as she saw her team dig an early hole against BA, before rallying late to take the first set by four points. “It would've made for a long weekend to have to host the tournament and us not be one of the teams participating. Fortunately, we calmed down and started to play much better.”

Fuqua fell behind early, and didn't tie the first set until an ace by junior Heather Hicks tied the set at 21 apiece. A Brunswick Academy time out didn't stop Fuqua's momentum. Hicks closed out the run to give the Lady Falcons a 1-0 lead.

Fuqua steadily pulled away from Brunswick Academy in the second set. The Lady Falcons held a 16-14 lead, and a 21-17 lead before junior varsity call-up Macie Ware deposited a kill in the back-right corner to push Fuqua's lead to four points. BA won the next point, but Fuqua closed out the set with three-straight points to win the second set.

It didn't take long for the Lady Falcons to get the lead in the third. Fuqua jumped out to a 9-2 lead, and stretched it to 13-4, before Brunswick Academy managed to put together a couple of short runs. A kill by Taylor Schmidt put FS ahead 18-8, and Fuqua traded points with BA the rest of the way to take the ten-point victory in the third set.

“The stats show how evenly everyone played. Overall, I'm pleased with how we played once we dug out of that early hole.”

Fuqua was scheduled to host No. 3 seed Tidewater (3-1 winners over No. 6 Southampton Academy) on Thursday night at 6:30 p.m. in the second contest of the night. Top seed Christchurch was scheduled to play No. 4 seed Kenston Forest at 5 p.m.

The winners of the two semifinal contests will face one-another in the VCC Tournament Championship Match on Saturday afternoon at 4:30 p.m.