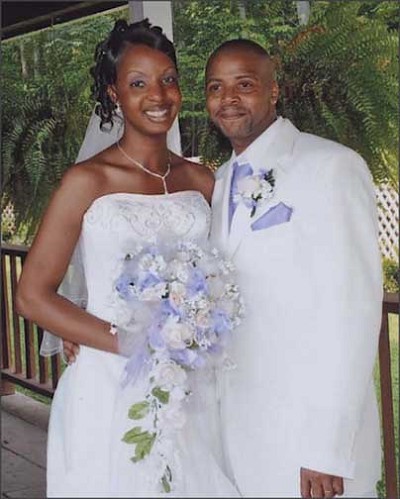 The bride, escorted down the aisle by her father, Wallace Bland Jr., and given in marriage by her stepfather, Thomas Eanes, wore a long strapless A-line ivory gown with designs on the bodice, hemline, and train. She carried a bouquet of mixed lavender and cream flowers adorned with pearls.

Andre Booker, uncle of the groom, of Salem, NJ, was best man. Ushers were Marcus and Jamai Johnson, of Rice. Ring bearer was Jalen Eppes; Bible carrier was Brandon Jackson.

The reception followed the ceremony in the Cedar Crest Conference Center.

The couple will reside in Farmville, They will take a wedding trip at a later date.

The bride, a 2002 graduate of Prince Edward County High School, is employed as a certified nursing assistant by Trinity Mission of Farmville.

The groom, a 1994 graduate of Nottoway County High School, is employed by McDonalds in maintenance.