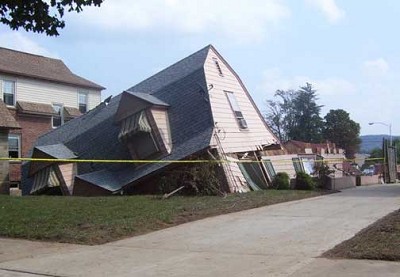 FARMVILLE – Carolyn Whitmore has a personal connection with the Red Cross.

“I got involved with Red Cross because, back in 2004, my son (who lives in Norfolk) got flooded out in Isabel. Red Cross helped him…And then, right after that, his house burned to the ground and they helped him again,” Ms. Whitmore says. “They even put him up in a motel that let him keep his dog and I was so impressed, I said, 'I gotta pay these people back.'”

She found the local Red Cross connection, received training and she's been on the helping end ever since.

Locally, when someone needs the Red Cross, it is Ms. Whitmore, a nurse who also volunteers at the Heart of Virginia Free Clinic, that they'll probably see. She's worked every house fire, volunteer fairs to get information out, and even checked to see if folks impacted by the tornadoes earlier this year were displaced (though none were).

More recently when the Red Cross wanted her to pitch in to help flood victims in Pennsylvania, her helping hand extended beyond her local community.

“…They said, OK, Hurricane Irene, flooding in Pennsylvania can you go to Wilkes-Barre? And you have to leave within 24 hours from the minute you get that phone call,” Ms. Whitmore reflected. “I know…That's why it's hard for a lot of people to do these national deployments.”

Plus, added to that, they ask for a three-week commitment.

In Pennsylvania, remnants of Hurricane Irene deluged multiple communities September 7-9. It doesn't take long for Red Cross to get workers where they're needed. Ms. Whitmore had packed her lone carry-on bag and was ready for service by September 10 as many places were still under water.

Volunteers went to the local Red Cross chapter first and then Ms. Whitmore headed to a shelter; Red Cross aims to have a nurse at open shelters 24 hours a day, seven days a week. There were initially 41 shelters and six nurses, though there were other volunteer nurses not directly connected to the Red Cross, who pitched in whether they were affiliated with the Red Cross or not.

“I had the job for the first couple of days of going to all of these shelters to make sure everything was being handled like it was supposed to,” Ms. Whitmore said. “I saw….clients…and took care of minor needs. If it's anything really major, you call 911 and they have to go to a hospital 'cause we can only handle small-I mean I only had a first aid kit.”

Ms. Whitmore served the community of Shickshinny, a town of about four blocks and less than 1,000 people.

As homes were deemed safe and people began returning and shelters closed, Red Cross workers went out on the streets setting up (with a mental health worker) emergency aid stations.

“They had cuts and they had nail puncture wounds and things like that because they were ripping…all the flooded stuff out of their houses…I took care of many cuts. Lot of puncture wounds,” Ms. Whitmore said.

And answered a lot of questions.

“…In the town that I was in, the town was totally underwater-ten foot of water,” Ms. Whitmore said. “It'd be just like…taking this Main Street of Farmville and covering it with ten foot of water. Everything was gone. I mean, some buildings were moved off their foundations.”

Wilkes-Barre, where she began her journey, had a levy system though many businesses were underwater, but it didn't affect the town. Folks could still go to the bank and drugstore.

“This town that I was in lost everything,” Ms. Whitmore said of Schickshinny (an Indian name that means the valley of five mountains). “Their drugstore, their bank, their grocery store. The only clothing store I saw was a Family Dollar, that was gone. The funeral home…their medical center, the town hall, the fire department, everything in this town including three quarters of the houses were flooded. And the road's gone.”

She found appreciative people-those in need directing help to their neighbor rather than taking it themselves.

On one occasion, Ms. Whitmore was standing out in the rain and two community members had gone to a church (where donations were collected) and brought her back a baseball cap and a poncho.

“I was impressed. And we saw that all the time,” she said.

She also remembers two little girls about ages five and seven standing on a porch with everything their family owned out in the yard.

“And they looked really sad,” she recounted. “And I was like, 'Are ya'll OK?' she recounted. “And the Red Cross has these little teddy bears that we give out and I said, 'Do ya'll want a teddy bear?' And I gave 'em both a teddy bear and if you'd've seen their face, I don't care if I don't do another thing the rest of my life…it was worth it right there just to see those two kids. It was awesome. And they just hugged me. Everybody just hugged you and loved on you. Thanked you-you'd go in a restaurant and somebody'd say 'I picked up your tab tonight, thank you for being here.'”

A company had contributed the use of a distribution center and donations were pouring in from bleach to rakes, coolers, facemasks, work gloves, rubber gloves-cases of ready to eat meals were supplied by FEMA. A team of volunteers also provided hot meals.

In the field, it wasn't all punctures and cuts. On one occasion, a man was almost in a diabetic coma. Friends had not seen the man that day, which they reported to Whitmore. She went to the home and saw the man through the window on the floor.

At first she sent for help-to see if there were some big man down the street to kick in the door. Then found she could shimmy a window up so she could get in and, in teamwork fashion, she was given a soft drink and a Pop Tart to help the man.

If somebody hadn't found him, Ms. Whitmore offers, he would have died on the floor. A couple of hours later, the man-a Vietnam veteran-was up and helping people.

Ms. Whitmore wants to go back to Shickshinny. She wants to see how the Town is progressing. Then, too, now house-to-house work is underway, which she says will take months. (There are more than 4,000 houses that have been identified in the region that extends beyond Shickshinny.) Of course, she could also spell Red Cross workers who followed after her previous time there.

In any event, she will likely always have a connection with Shickshinny.

Things are getting a little better as the number of shelters has declined in Pennsylvania. Even before Ms. Whitmore left, the bank had cleaned out a corner for a teller to set up and an ATM-type machine; the grocery store brought in a tent and was selling dry goods. Residents still had to go to another town to get their mail.

As for local needs, Ms. Whitmore says she'd like to have a few more Red Cross volunteers. They won't have to go to places like Shickshinny (unless the opportunity arises and they choose to do so). Volunteers don't have to be available to respond to national emergencies and don't have to be connected to the medical field. They just need to be able to respond to an immediate need in their own community following a disaster no matter the size.

(Anyone interested in volunteering with the Red Cross can contact Ms. Whitmore at the Heart of Virginia Free Clinic at 434-315-5701.)