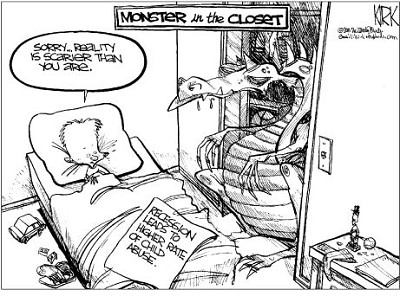 Even though Prince Edward County and the Town of Farmville are no longer pursuing creation of a regional water authority, after the Town's abrupt withdrawal from negotiations, we at least know our congressman is prepared to lend what valuable assistance he can to construction of a pipeline from the Sandy River Reservoir-whichever locality ultimately does the necessary thing for this community.

The congressman has not yet been approached by anyone from the Town or County-which had been deep in what were described as positive negotiations over a regional water authority proposal based on using the Town's infrastructure-about possible federal funding options.

But he was asked by this newspaper about his ability to support federal funds for the construction of a pipeline from the Sandy River Reservoir should that wisest course be embraced-which it most definitely should because only a pipeline from the Sandy River Reservoir would provide this community with a drought-proof source of water for the imaginable future. And we can imagine the future lasting a long time.

Rep. Hurt is thoroughly opposed to earmarks. I wish he wasn't, though I understand his thinking without agreeing with it. Earmarks are not inherently corrupt nor do they necessarily increase the federal deficit. Given his stance on earmarks, let us be careful not to put words in the congressman's mouth and, as a consequence, false expectations in this community's hopes.

With that note of caution, Rep. Hurt's words speak quite clearly for themselves. Barring the use of earmarks, he's willing to look for ways federal funding could, from his point of view, be legitimately used on a pipeline project from the Sandy River Reservoir to the Town's water treatment plant.

“What I have said is that I am not in favor of earmarks. I think that that is part of that corrupt process that is what got us into this (budget deficit) jam we're in,” he told The Herald in a recent interview. “But, with that said, to the extent that there are federal funds, grant opportunities, that exist I'm going to represent, I'm going to do my best to represent the people that I represent. And to the extent there are those opportunities, we will assist and support those things that we can, to help (the project) out.”

Rep. Robert Hurt's statement to The Herald should be noted by local officials and filed away for ripening until words can effectively meet deeds.

This community has contributed at least its fair share of tax revenue to the federal government. There can be few things more legitimately justified for government funding-local, state, federal-than a water supply project that assures the long-term survival of a community like Farmville-Prince Edward and all that it means to the region and the state. And to the nation, quite frankly.

In fact, no more appropriate uses of such funding come to mind because without a water supply there will be no further use of anything.

So, if Rep. Hurt wanted to make completely incorruptible use of the earmark process to assure that the Prince Edward County Public School system, Longwood University, Centra Southside Community Hospital, every job and business and every home in Farmville-everything here now and every job, home and everything else to come-never run out of water, let him secure those funds that would otherwise go elsewhere and hear our deepest gratitude.

Yes, indeed, let us all rally to stop earmarks from being used corruptly, but failing to justifiably use earmarks is not necessarily in the best interests of a community and its constituents.

With all of the federal tax dollars that have been paid by the people of Farmville and Prince Edward-there are federal toe marks, shoulder marks, back marks, and leg marks where the federal government has exacted its pound or more of flesh-an earmark in return is completely justified.

But however Rep. Hurt can pull it off, when the time comes, credit to him.

He can do nothing, however, without the Town of Farmville or Prince Edward County coming to him with a plan for our community's survival.

A plan that they could put in place far better together than apart.