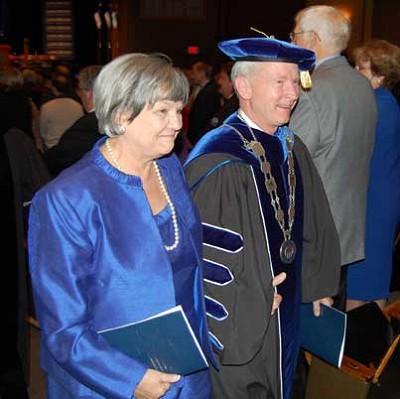 “I believe that the wisest investment we can make is in education,” he said during his inaugural address at Longwood University. “The rate of return is world peace.”

The retired Army Brigadier General understands full well the consequences of a bull market on armed conflict. Referring to Finnegan's many Army medals, former LU Board of Visitors Rector John Adams noted, “his uniform may weigh more than Patrick Finnegan himself.”

Finnegan carries the weight of expectations well, too.

“You have certainly not faded away,” Larissa Smith Fergeson said, conjuring Gen. Douglas MacArthur's farewell speech as she gave her official greetings from the faculty. “You have energized our community.”

Energy needed to empower the world with wisdom, not war.

After 12 years at West Point and 15 months at Longwood, Finnegan said, “I believe more than ever that educating our young people is the only way to ensure our freedom and success as a nation.”

Many thoughtful pens are mightier than many thoughtless swords.

Finnegan, who was surrounded by enthusiastic students wanting to be photographed with LU's president following the inaugural ceremonies, made scholarship, service and standards the theme of his inauguration.

“And these elements,” he promised, “will be the hallmark of my presidency.”

United States Senator, Jack Reed, of Rhode Island, a decades-long close friend of Finnegan, closed his keynote address Friday by quoting the Irish poet Seamus Heaney: “History says, Don't hope on this side of the grave. But then, once in a lifetime the longed for tidal wave of justice can rise up, and hope and history can rhyme.”

Today, the Democratic Senator and fellow West Point graduate said, “we can all sense, under President Finnegan's leadership, that the men and women of Longwood University will help bring us closer to that day when hope and history truly rhyme.”

“As your leader,” Finnegan told a packed Jarman Auditorium, “I believe that honesty and transparency comprise the glue that holds an institution together. That bond will enable us to work together and move forward with confidence and success.

“I pledge that as your president, I will act with openness and candor, knowing that honesty will serve us best. We must teach-and practice-service above self and civility towards others,” said the former chief academic officer at West Point.

“Most importantly,” he continued, former Longwood presidents William Dorrill and Patricia Cormier listening, “I want to invest in Longwood's greatest asset-our people. Every day I see examples of how the faculty and staff positively influence the lives of our students. I appreciate your commitment to scholarship, service and standards…Because of you, we have a strong sense of community on this campus, what we often call 'the Longwood family.'”

LU's president pledged to do all in his power “to see that our faculty and staff members are compensated at the levels they deserve, for the future success of our students-and our university-depends on them.”

Looking beyond the confines of the campus into and beyond the community that Longwood calls home, Finnegan said “in the coming months and years we will do everything we can to promote Longwood as a regional economic engine for Southside Virginia. We can do much to enhance our region's business, industry, environment, energy sources, healthcare, education, and the arts and cultural life. We here at Longwood are committed to serving this community and our commonwealth.”

Finnegan brought his address to a close and an ovation by pledging that “with the strength and common sense I have gained from life, with the confidence that my family, friends, and dedicated faculty and staff have imparted to me, and with the goodwill shared with me by our students, I reaffirm the promise I made 16 months ago to uphold the high standards of this university, to promote excellence in scholarship, to choose the harder right over the easier wrong, and to forge new ties of friendship and new opportunities of service.

“I will do the very best I can for Longwood,” he vowed, “because as of today, not only you, but I, am a Lancer forever.”

A year and a half after he arrived, Finnegan took the oath of office and emerged into the afternoon sunshine.

Call those months, Adam had said, “the educational equivalent of living together before getting married.”

No longer betrothed, Longwood University and its 25th president Patrick Finnegan both said, “I do” on Friday.

Hundreds of sons and daughters will go forth into the world each year, sheathed in the armor of scholarship, service and standards.

A world to be won through wisdom and active compassion.

The return on an investment.