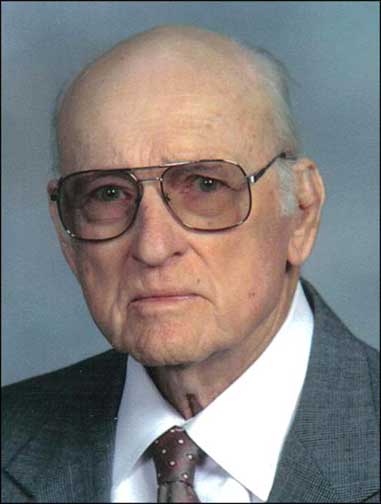 RICE, Oct. 4 – James Hudgins Mahan, 92, of Rice, passed through the gates of heaven on Saturday, October 1, 2011 at St. Francis Medical Center in Midlothian.

He was born September 22, 1919, in the Rice countryside of Prince Edward County, the son of the late Lemuel Mahan and the late Eunice Thompson Mahan. He was also preceded in death by his wife of 59 years, Hilda Hubbard Mahan, and brothers, Reid A. Mahan and Raymond F. Mahan.

Mr. Mahan was a veteran of World War II, serving in the US Army 9th Air Force Co. C 1709 Signal Service Brigade in the European, African, and Middle Eastern Theaters from 1942 until 1945. From 1946 until 1981, he worked for the Virginia Telephone and Telegraph Company and Centel, retiring as manager of the Farmville Commercial Office Exchange.

After retirement, Mr. Mahan devoted his days to maintaining his home, Avondale Farm, with his wife until her death in 2006. He continued his great devotion to his family and farm until his death. His witness to others was through his love of God, and he always was a true neighbor and friend to those who were fortunate to know him.

Mr. Mahan was a life member of the Veterans of Foreign Wars and a past member of the Rotary Club and the Farmville Chamber of Commerce. He was also a member of Pisgah Baptist Church in Rice.

The family will receive friends Thursday evening from 6:30 until 8 p.m. at Shorter Funeral Home.

A funeral service will be conducted at 11 a.m. on Friday at Pisgah Baptist Church in Rice. Interment will be in the church cemetery.

Shorter Funeral Home, Farmville, is in charge of the arrangements.