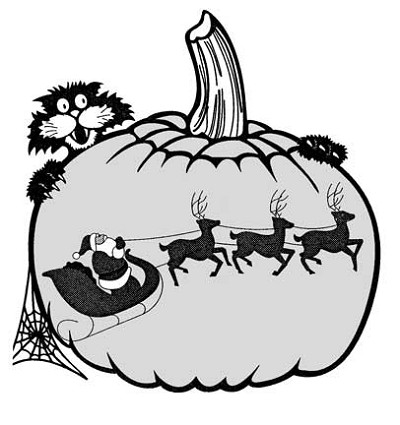 “I need some really nice pumpkins,” granddaughter Amy commented last week. “Where can we find them?”

Amy is getting married this weekend and plans to use pumpkins as part of her wedding decor. We had already planned to visit several stores for various wedding-related items that day.

“I'm sure we'll find some pumpkins along the way,” I said.

It was, after all, mid-October. A harvest theme should be easy to follow.

Imagine my surprise when we entered the first store on our list – and what to our wondering eyes did appear?

I turned to my granddaughter.

“Did I miss something?” I asked.

I wasn't even wearing a winter coat on this mild October day.

Always the practical one, Amy suggested, “Maybe it's Trick or Treat Santa.”

I hadn't considered that.

“Maybe Santa wants to join the Halloween fun,” I nodded.

“What kind of costume would Santa wear?” Amy wondered.

“The Ghost of Christmas Past?” I suggested.

“Santa in a sheet – I don't think so,” Amy laughed. “And what about the reindeer? Those antlers would give them away.”

She had a point there.

“With all that flying around they'd be more than three sheets to the wind,” I agreed.

“Maybe Santa's going undercover – he might be checking out who's naughty and nice,” Amy suggested. “If Santa doesn't get a treat at your house on Halloween night – look out Christmas Eve!”

“But how many people give cookies and milk on Halloween,” I observed.

“That's the point,” Amy nodded. “It could start a whole new marketing trend.”

“You're right, Amy,” I said. “If this Trick or Treat Santa thing catches on shoppers will have to go to the feed store for reindeer treats. Without snow on the ground the reindeer will start snacking on prize rose bushes or a favorite apple tree while Santa goes door to door.”

We paused to consider the implications.

“There's something else,” I said. “What will Santa do with all that trick-or-treat candy?”

“He could recycle,” Amy proposed. “Things keep a long time at the North Pole.”

The thought of finding a slightly aged caramel apple in your stocking Christmas morning occurred to us both. It was not appealing.

“I wonder what Santa would do with all the candy canes he wouldn't need,” I mused. “If Santa came back for Halloween, why not Easter?”

“Candy canes and Easter eggs,” Amy commented. “This is getting complicated.”

“What if Santa decided to come back in July,” I continued. “Can you imagine Santa on the beach in Bermuda shorts? Cleaning up after all those reindeer wouldn't be any picnic either. And think of the elves. How would they walk in the sand with those pointy-toed shoes?”

Nevertheless, with all those frequent flyer miles old St. Nick has accumulated over the centuries, he just might decide to do more traveling during the off-season. (I could tell my Trick or Treat Santa theory was snowballing, but I couldn't help myself.)

“I think the store is asking for trouble by bringing Santa out before Halloween,” Amy said.

As we started down the aisle I heard the faint tinkling of sleigh bells. When I turned around, I could swear I saw Santa wink.

“Why don't we get some cookies and milk, too,” I suggested.

It pays to be prepared.