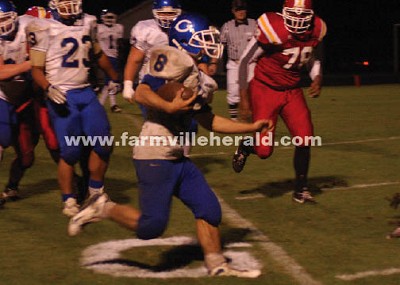 GOOCHLAND – The gauntlet of games to wrap up Cumberland High School's football season reads like a who's who in Group A football.

Such is life in the James River District. Despite a decent start, the Dukes were unable to slow the Goochland offense in a 49-6 loss.

“For a little while I thought it might be our night,” said CHS head coach Mike Sutton. “But it wasn't meant to be. Too many missed tackles. We did okay stopping their run, but they burnt us with pass plays.”

Cumberland received the opening kickoff and returned it to midifield. Normally, that's not such a big deal, as Goochland's kicker can routinely reach the endzone. A slip on the wet turf at midfield likely cost Rashawn Sims a touchdown.

After Cumberland was forced to punt, the Dukes had another stroke of good luck when a blocked punt was recovered by Goochland, fumbled and recovered by Cumberland.

The Dukes, however, were not able to capitalize on either opportunity.

Goochland scored late in the first quarter, but blew the game open in the second with four touchdowns to take a 35-0 lead at the intermission.

Goochland went up 49-0 before Cumberland got its lone score midway through the fourth quarter. Against some cleaner Goochland uniforms, Cumberland put together a 98 yard drive that was capped with a four yardtouchdown by Justus Dowdy with 6:03 left to play.

Dowdy led the Dukes in rushing with 74 yards and the touchdown on 17 carries. Ke'Ron Langhorne had 40 yards on seven carries.

Defensively, Cumberland was led by Arthur Byrd, who had 11 tackles. Bo Winbush had 11, while Dione Booker had eight.

The road gets no easier this week, as the Dukes return home to host Buckingham in the Battle of Route 60. Kickoff is scheduled for 7 p.m.

“We've got to put this one behind us,” said Sutton, who said on Monday afternoon prior to practice that his players wanted to skip the film session and go right into work on Buckingham. “The kids are looking forward to the game, and they know they'll have their work cut out for them, but they're looking forward to it.”