From Habitat To Home 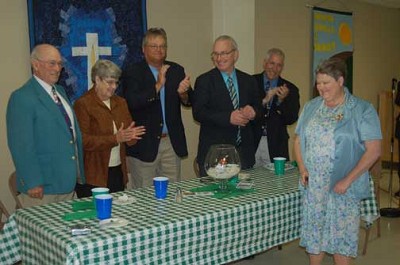 It was a chilly April afternoon in 1997 when a group of volunteers gathered on Gross Street to build Farmville's fourth Habitat house. A Habitat Blitz Build that would take only 44 hours from foundation to finish, this house would be the home of Cindy and Roy Davis. Last month, one year ahead of schedule, Cindy and Roy celebrated a “blitz” of their own – they made the final payment on their Habitat house.

A mortgage burning ceremony was held to celebrate the occasion at Farmville United Methodist Church on Sept. 18. Many of the volunteers who built the Farmville couple's house attended.

On that April night 14 years ago, it was the pastor of Farmville UMC, the Rev. Mark Ogren, who opened the Build with prayer. “We are here to build a home for Cindy and Roy Davis,” he told the assembled volunteers.

For the past decade and a half, Cindy and Roy have lived by that advice.

“Because of the church's help in building their Habitat house, Cindy and Roy have become an important part of our church family and good stewards of their resources,” stated the Rev. Sylvia Meadows, current pastor of Farmville UMC. “They take tithing seriously and set an example for the rest of us to follow.”

Since joining the church, Roy has gone on several mission trips and serves on the Usher Team. Cindy assists with the funeral ministry and often helps in the kitchen. She also visits a nursing home in Dillwyn on a regular basis to read to residents. Cindy is an active participant in Special Olympics and is proud of the medals she has won in competition.

Cindy and Roy, who celebrated their 20th wedding anniversary in June, met at Southside Community Hospital. Cindy was working as an orderly. Roy, who had worked as an orderly for a hospital in Charlottesville before moving to Farmville, was employed by SCH in the x-ray department.

“We trained Roy to file films,” his supervisor at the time, Charlene Robins, commented. “He always strived to do his best.”

Although Roy walked to work he was never late – and he never missed a day of work.

Cindy explained how she and Roy got together.

“We had some help,” she said. “What happened was one of the nurses aides wrote a letter to Roy and signed my name to it – and a patient donated a rose to the cause.”

Cindy and Roy lived in a house on Randolph Street until it was demolished for a parking lot and then moved into another apartment in town.

“Our old apartment had holes in the wall,” Roy recalled. “The windows had holes where the cold air could come in. The pipes would freeze over – we didn't have heat in the bathroom.”

Not only did Rev. Ogren get involved in Cindy and Roy's Habitat house, he encouraged other church members to do so as well.

“Love is building this house, the love of this community for Cindy and Roy,” Rev. Ogren stated in his dedication prayer that April night 14 years ago.

Shadows crept like icy fingers over the site as daylight faded. The sun was calling it a day, but Habitat volunteers were just beginning. It was 6:10 p.m. Over 200 volunteers would work around the clock for 44 hours until the house was complete. (Farmville Herald, April 25, 1997)

Because this was a Habitat Blitz Build, already constructed wall panels, including windows, would be lifted onto the foundation via crane.

There was a rhythm to the work site as panels swung into place. Hammers swung in staccato bursts, picking up the tempo. By 6:50 p.m. the last wall panel found its place. Forty minutes had elapsed since the first hammer blow. (Farmville Herald, April 25, 1997)

There had been some concern about the weather the week of the Blitz Build.

“They were talking about bad weather – like raining or even snowing that weekend,” Roy recalled. “I was floating that day when I saw that blue sky!”

The sky was still clear that night when the sun set. Then the work began in earnest.

Four powerful overhead lights blinked on. Most of the dedication crowd was gone; a few women who have braved the stiff wind to watch gathered their children and prepared to go. The crane swung front and center to lift the first roof truss. Workers turned up their collars and waited for the next job at hand. It would be a long cold night.

A number of contractors who volunteered for the Build would work through the night both Friday and Saturday. Approximately 50 local contractors and businesses donated their time.

Lynn Meadows, of Farmville UMC, was in charge of scheduling each hour of the build. It was his job to watch the clock and make sure every part of the build was completed in the same manner – like clockwork. Assisting Meadows was Larry Cochran, another Farmville UMC member and president of the Habitat Board. Both were on the site almost around the clock.

By 3 p.m. on Saturday, work was progressing well. Rev. Ogren was trying to persuade Meadows, who had been on the site without sleep since early Friday morning, to go home to rest. Meadows was smiling, but his face wore the burden of a hundred details. He nodded and went back to work. He would not leave the site until almost midnight. (Farmville Herald, April 25, 1997)

By Sunday morning the build was ahead of schedule; by 2 p.m. – four hours ahead of the planned finish – the house was completed, the yard was landscaped, and flowers were planted in neat borders around the deck.

Ten minutes before 6 p.m. the Davis' yard was full. The mood was relaxed. Workers, cleaned up and some in Sunday attire, mingled with friends and well wishers from the community.

“The biggest thing that touched me was the love here, Lynn Meadows addressed the crowd. “I helped coordinate, but you did the work.” (Farmville Herald, April 25, 1997)

The community involvement that built a house for Cindy and Roy would continue through the years.

“We had a lot of help from the church,” Cindy stated.

Once settled in their new home, Cindy's mother helped the couple with budgeting.

There were, however, bumps along the road to home ownership.

“When Roy lost his job it was scary,” Cindy recalled.

Eight years ago the job Roy had held at the hospital for 23 years was eliminated.

Members of Farmville UMC continued to look after the couple, taking a special collection when Roy was hospitalized and unable to work for a number of months.

“This type of ministry is the epitome of what the church is called to do,” Rev. Meadows said. “The greatest challenge is to help those in need in our own community. We're at a unique time in history to do that.”

Cindy and Roy are deeply appreciative of all the church has done to help them – and they plan to return the favor.

“When something happens to Cindy and me, we're going to give our house to the church,” Roy concluded.

“The mortgage burning celebration was for what the church did,” he added. “If it wasn't for our church family during hard times, we wouldn't have had this house.”

Cindy and Roy understand it better than most – only God can turn a house into a home.