Buckingham Edged By Randolph-Henry In Five 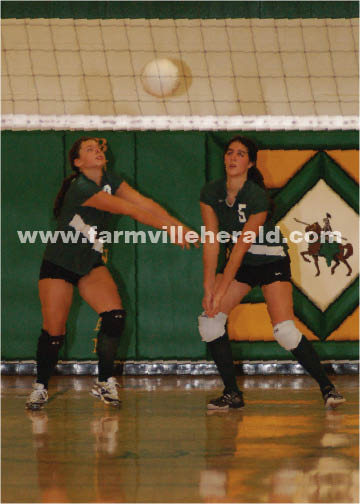 BUCKINGHAM – The Buckingham County High School volleyball team pushed Randolph-Henry to the brink of an upset on Wednesday night in a James River District match, before falling to the Lady Statesmen 3-2.

Buckingham tied the match at two games apiece with a 26-24 victory to force the fifth set tiebreaker. Randolph-Henry jumped out to a small lead, and held a 12-9 advantage, before Kim Warner registered a kill to give the Lady Knights the serve. The run never materialized, as the Lady Knights were unable to draw even in the race to the 15th point. Buckingham regained possession down 13-12, before the two teams traded service errors. On a match full of long rallies, it was fitting that R-H won on one of the longer rallies of the night.

“Fifteen comes up on you real quick,” said BCHS head coach Ethan Abruzzo. “That's one you'd like to get, but we came up a little shy. If a ball bounces higher or lower, maybe we make a point. I felt like we had a couple of good returns on match point that would've allowed us to tie, but Randolph-Henry got to the ball, dug it out and was able to hang in there until we made a mistake.”

Randolph-Henry won the first set 25-21, but Buckingham battled back in the second. Trailing 14-13, the Lady Knights gained the serve and rattled off six straight points to take a 19-14 advantage. Up 20-18, Buckingham won five of the next six points to take a 25-19 victory. A block by senior Kim Warner during that run helped keep the momentum in Buckingham's favor.

Randolph-Henry eased to a victory in the third set, and held a 24-8 lead before Buckingham went on a 7-0 run to close the margin to ten points at 25-15. The run may have given Buckingham the needed confidence to force the fifth set. Up 12-9, Buckingham got an ace by Chelsea Shumaker followed by a Warner block to push the Lady Knights up 15-9.

Buckingham was able to maintain a small lead. Up 21-18, a block by Katelyn Gough extended Buckingham's lead to four points, but Randolph-Henry managed to wrestle the lead away from Buckingham at 24-23, before the Lady Knights scored three straight points on R-H to tie the contest.

“We had a couple of big service errors during the match that could've turned it the other way. We had eight in the first set, and lost by five. I stressed that we needed to cut that down between the first and second set, and they did. Overall, I saw a lot of improvement, and this is what we need to do. We need to continue to improve, and maybe we can get a couple victories and improve our seeding for the district tournament.”

Buckingham will travel to Central of Lunenburg on Monday, before returning home to face Cumberland next Wednesday.