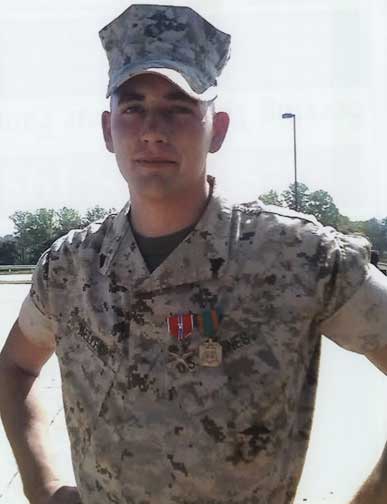 A two-year old girl in Afghanistan has her life.

There are stars in the Afghan sky but a Bronze Star shines brightest for her.

Corporal Kelley, a 2006 Prince Edward County High School graduate, has two daughters of his own, Shyanne and Ava. Their mom, the corporal's wife, Stephanie, brought the Bronze Star story to The Herald to share with the community, and as a surprise for her husband, who is home now in Farmville.

Perhaps Corporal Kelley was reminded of his own daughters that day in Afghanistan when he earned the Bronze Star Medal (with combat distinguished service) for astonishing bravery.

The date was April 2 and Corporal Kelley was on squad patrol, providing mobility support as the patrol searched several compounds. Suddenly the patrol began receiving “accurate enemy fire from 400 meters away.”

The war right there in your face.

Your wife and kids on the other side of the world and the end of your life perhaps a split second away.

With the bullets flying, Corporal Kelley suddenly noticed that a two-year old girl was “directly in the enemy's line of fire,” Lt. Gen. Waldhauser tells the president.

No thought for his own life.

“Selflessly, he ran to rescue the girl as the enemy tried to target him. Once he reached a covered position, Corporal Kelley was able to keep the frightened child safe while the squad continued to engage and defeat the enemy force,” the Marine Commander relates.

When the battle was over, Corporal Kelley returned the little girl to her parents, “building local confidence in Coalition Forces. By his extraordinary guidance, zealous initiative, and total dedication to duty,” the Lt. Gen. writes, “Corporal Kelley reflected great credit upon himself and upheld the highest traditions of the Marine Corps and the United States Naval Service.”

Amazingly, that's not even all of the story behind Corporal Kelley's Bronze Star Medal.

While taking cover the platoon's corpsman injured his foot and was unable to move on his own.

The rescuing helicopter arrived as the enemy kept firing from three different directions.

What did Corporal Kelley do?

“Corporal Kelley selflessly disregarded the heavy volume of enemy fire and carried the corpsman 800 meters to the landing zone,” the corps commander states.

Or nearly the length of nine football fields.

Not carrying a football tucked under one arm for millions of dollars, while a few guys try and tackle him and adoring fans cheer.

Back home in Farmville, it was a Thursday. Main Street was decorated for Christmas as a Bronze Star was rising in the darkness over Afghanistan.

But even that is not all because Corporal Kelley also was awarded the Navy and Marine Corps Achievement Medal for cumulative actions from November 2010 to June of 2011 in support of Operation Enduring Freedom.

According to that citation, Corporal Kelley's technical expertise over the course of 120 combat patrols resulted in the removal of 15 different weapons, over 4,000 rounds of ammunition, 30 pounds of explosives, 10 pressure plates and three remote firing systems from the battalion's area of operations.

Weapons that could not kill U.S. soldiers or innocent Afghans.

Certainly he'll simply say he was just doing his job the way any other Marine has done and will do in service to his nation.

The medals say he did it to the very highest degree of human courage.

The medals are pinned over his heart.

A heart that beats for more than one man alone.

A heart that was the answer to many prayers.