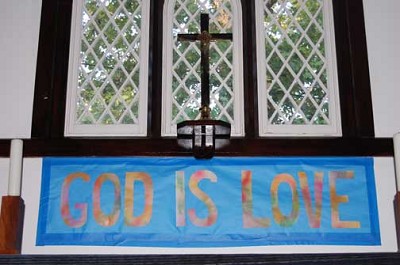 There is still a hole in the New York City skyline.

A hole, too, inside the hearts of those who lost the ones they loved-and still do love-in New York, at the Pentagon, and a field in Pennsylvania during the terrorist attacks a decade ago.

All of those holes survive.

But so have we.

As individuals and as a nation, we have not been buried in those holes.

And we are transforming those holes as we transform ourselves.

We have not been swallowed.

The terrorists could not achieve that goal.

The terrorists failed to achieve their greatest ambition.

They wanted all of us to bury ourselves in fear and hate.

We have not done so.

They could not force us to.

They cannot force us to.

They will not force us to.

We began climbing out of those holes from the moment we learned of the attacks. We are still climbing. Resurrecting ourselves. Some are further along than others. But we are all still climbing, turning those holes into mountains, mountains with peaks from which we can see a truth far more powerful than terror.

By refusing to be buried, we have turned the terror inside out.

The terror has become something else, a ladder we are climbing to higher ground.

By refusing to dig those holes deeper and deeper, refusing to finish the job the terrorists started on the morning of September 11, 2001, we have planted the seeds of our belief and of our faith in the better angels of our human nature, reaping what we did sow, and thus denying the terrorists their dreamed-of harvest.

We have not dug a grave for each other in our hearts.

We could have done so.

We might have done the terrorists' work for them, digging those graves in our hearts so deep that our world itself, and each of us in it, became like the World Trade Center and collapsed under the weight of our own raging hatred, desperate despair, and a faithless future without hope.

But we began shining our lights before night fell on the evening of September 11, 2001.

Nor have we ceased to shine.

Look what each of you has done during the past decade, the people you have loved, the life-affirming good works you have shared by joining hands with others.

We have graduated from high school, and from college.

We have read books, sung songs-each opened book defeating the terrorists, every song's note a clarion call defeating the silence that terrorists wanted wrapped around us like a shroud.

We have secured employment, we have married, shouted 'Yes!' to this life and this world and have become parents, allowing others to become grandparents.

We have built churches-the terrorists wanted us to lose our faith.

We have expanded hospitals-the terrorists wanted us to stop caring, to cease healing.

We have strengthened our outreach in so many ways in Farmville, Prince Edward, Buckingham and Cumberland-the terrorists wanted us to keep our hearts to ourselves, locked away from anyone else forever.

We are building homes-the Farmville Area Habitat For Humanity is doing more now than even its marvelous results of ten years ago.

The terrorists wanted those families to go homeless.

We are feeding our hungry-FACES and Meals On Wheels are reaching food to so many more people.

The terrorists wanted them to go hungry.

The United Way of Prince Edward is still united. And the Southside Virginia Family YMCA has more people gathering together for a life-affirming common purpose, emphatically declaring Y instead of asking of why. The terrorists wanted people huddled alone, without answers.

Anywhere you look, you will find something of goodness, of greater goodness, than existed ten years ago.

Hatred has not won.

Something greater has triumphed, instead.

The terrorists wanted ashes and dust.

We have risen on wings.

Courtesy Grows With Habitual Use