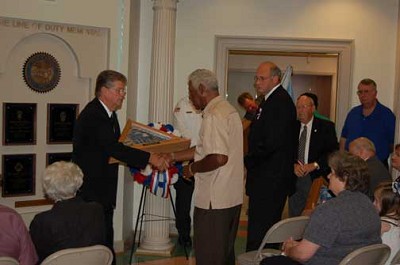 PRINCE EDWARD – In the days before cell phones and unlimited calling plans, it was less expensive to dial on Saturdays and Sundays than during the work week.

The semester was winding down in the spring of 1981 and Hampden-Sydney College freshman and volunteer firefighter David Paul Bruce from Baltimore had not, to the disappointment of his mother, called on her birthday during the week. She had told him to call on weekends, but of course, unless he had concerns, he could always call.

The two had talked a couple of days after her birthday, which was April 28, and she told him she had stayed in the house all day waiting for him to call. He apologized and reminded her that she told him to call on the weekend.

That was before May 9.

“…I was on my way out the house to a church gathering and when I got to the door it was this very big card that had come from him that was saying thank-you for being such a beautiful mom…,” recounted Jeanette Bruce of the events of May 9, 1981. “And I looked at the card and, on the way out the door, there's a chair right there, I looked at the card…and it also had in there where he wrote…'Mom, please forgive me for not calling you on your birthday.'”

He also expressed hope that it would heal the wound.

“Three hours later, my world changed for the rest of my life,” Mrs. Bruce said.

Her son, an active member of his adoptive community, was responding to a call with other firefighters on May 9 to a chimney fire on Route 15, according to The Herald news story at the time, when the fire truck he was riding on was struck by another volunteer fire department vehicle from behind. The young man died about an hour after the accident.

On a Saturday, May 9, the day before Mother's Day.

Sunday was a time to remember Bruce and others who died in service to the Prince Edward Community:

Robert Wright Smith, a Virginia State Trooper who was killed in an automobile accident on November 21, 1951.

And Joel Franklin Coleman Jr., a firefighter from the Prospect Volunteer Fire Department, who died January 17, 1977.

Each, in their own way, a community servant giving of their time and, tragically, their lives.

“Today, in Prince Edward County, we take this opportunity to recognize and express our appreciation to our community first responders – law enforcement officers, volunteer firefighters, emergency medical personnel, and emergency services workers – all of you who run toward danger, while most of us shy away,” Board of Supervisors Chairman William “Buckie” Fore offered in the solemn ceremony.

County supervisors had established an in-the-line-of-duty memorial to honor those who gave their lives in the line of duty to the citizens of the county.

Officers representing a wide range of public service departments stood in uniform stood against the walls inside of the nearly filled courtroom in a ceremony that would include an invocation from Rev. Earl Wallace, Pastor of Pisgah Baptist Church, and a benediction from Rev. Eva B. Hurt of High Bridge Baptist Church.

On, appropriately, Sunday, September 11, four plaques were unveiled in the third floor atrium of the County's courthouse recognizing those who ultimately gave their lives in service.

A reminder that those rendering safety are often in harm's way.

Joel Frank Coleman Jr. was a member of the Prospect Volunteer Fire Department. The 49-year-old father of three was also the postmaster in Pamplin, a member of the state and national postmaster's association (serving as President of the Virginia Chapter of Postmasters). He had served as the president of the Prince Edward Academy Lower School PTA where he worked on a fundraiser for playground equipment, was active in his church.

The civic-minded man was constantly on the go.

Coleman had just run a call that morning and a little after 7 a.m. the part owner of the store next to the post office called and advised that Frank was real sick and that if he was taking any medicine to bring it.

“…I knew something was wrong because being on the fire department, he has one of those radios, you know,” his wife LaNette Coleman recounted. “In fact, I think he had two maybe and he might've had one with him and they said one of the fireman – they didn't say the name – is real sick and call the rescue squad.”

A January 14, 1977 front page article in The Herald reads, “As a member of the Prospect Volunteer Fire Department, he had responded to an alarm about 6:45 Monday morning in the extremely cold weather, and was returning to work with another fireman when he died of an apparent heart attack.”

President and Assistant Chief of the Prospect Volunteer Fire Department Howard “Pete” Campbell, in honor of Coleman, read the Fireman's Prayer as part of the program:

When I am called to duty, God

Wherever flames may rage,

Give me the strength to save some life

Whatever be its age.

Help me embrace a little child

Before it is too late,

Or save an older person from

The horror of that fate.

Enable me to be alert and

And quickly and efficiently

To put the fire out.

I want to fill my calling

And give the best in me,

To guard my every neighbor

And protect their property.

And if according to your will

I should lose my life,

My children and my wife.

“I think it was really a nice program. I appreciated them doing it very much – and for the other men, also,” Mrs. Coleman said in a reception after Sunday's event.

Lieutenant Bill Powers, a recently retired Virginia Conservation police officer with the Virginia Department of Game and Inland Fisheries, detailed Frank Hatchett Gilliam and his wife lived in the Sandy River area of Prince Edward. Gilliam, 45 at the time, was attempting to apprehend a person who was hunting illegally on Sunday morning, April 28, 1929.

“…This individual ambushed Officer Gilliam and shot him in the head with a shotgun-killed him on the spot,” Powers explained. “When he didn't show up that morning for church, search party went out and found him.”

Powers said they assume he was probably the first officer killed in the line of duty in Prince Edward County.

“I'm honored to be able to be here…in the memory of Frank and I appreciate what Prince Edward County has done to memorialize all these individuals who paid the ultimate sacrifice,” he said.

Captain Paul Kvasnicka Jr., the Division commander, Bureau of Field Operations for the Appomattox Division of the Virginia State Police, on hand to help pay tribute for Trooper Robert Wright Smith thanked the county for permanently memorializing the life and spirit of the trooper.

“This is an occasion that's been a long time coming,” he said. “This is also one of those events that pull you in two different directions. We're proud and pleased to see such a respected member of our organization memorialized for his duty to the Commonwealth of Virginia, but at the same time, it's difficult and painful because we're forced to once again revisit this tragic event that claimed Trooper Smith's life. Even with the passage of 60 years, his loss still remains a harsh reality for his family and for the department of State Police.”

Trooper Smith joined the department in July of 1936 and was initially stationed in Alexandria and, over the years, was assigned to patrol in Roanoke, Falmouth, Richmond, Norfolk, Lynchburg, Ashland, and in Pamplin (where his patrol assignment was in Prince Edward and Appomattox).

Back in the early days of Trooper Smith's career, Captain Kvasnicka detailed, a dispatcher would call a local service station and they would hang a flag out and when the trooper drove by, he would see there was a call for service. The trooper had a good record, had commendations for gentlemanly conduct, courtesy and cooperative assistance. He was also particularly noted for quickly recovering a stolen truck at a time when auto thefts were prevalent but difficult to track down.

On November 21, 1951, Capt. Kvasnicka cited, Trooper Smith was killed instantly by a passenger train at a crossing in Pamplin just off of Rt. 460. The native of Hanover County had just left Appomattox headquarters and was on his way to stop by his home in Pamplin when his patrol vehicle was struck by an east bound train. Trooper Smith was 37 years old.

Prior to his service in the State Police, Trooper Smith had been elected as a justice of the peace in Hanover County. While assigned here, he was an active member of the Masonic Lodge, the Pamplin Ruritan Club and the Pamplin Methodist Church.

“With his name featured on this memorial,” Capt. Kvasnicka said, “Trooper Smith will forever be remembered not as a line of duty death, but a public safety professional who gave his life for what he believed in. It is a reminder to all who pass this way – for the local resident and visitor alike – that these outstanding individuals are heroes. For their public service and ultimate sacrifice, heroes never to be forgotten.”

Family members and speakers went to the atrium for the unveiling off the memorial.

“Ladies and gentlemen, the board of supervisors is humbled to be joined by you, the families of four brave men each who gave his life in the line of duty,” Fore said, just prior to the unveiling of the memorial. “I can think of no words to adequately express the gratitude of this board, this County and its citizens. We hope that you will find this memorial an honorable tribute to your loved ones.”

In front of the County's courthouse the Virginia and U. S. flags flew at half-staff. Inside, each of the families was presented a boxed County flag.

Mrs. Bruce, after reflecting on the events of the day she received the news, offered that they're never going to forget David, but that it certainly feels good when other people have not forgotten him either.

“I'll never forget what the priest said at his funeral,” David Paul Bruce's father, also named David, recounted. “He said that young man has done more in 18 years than some people he'd known to live 88 years.”

A double major at Hampden-Sydney, David (who has one sister) was aspiring to be an attorney.

His dad says his son was ahead of his time.

“He was a wonderful son,” his mom also said. “Never had a moment's problem out of him and I felt so good about him going off to college because he was so mature that I had no fears like most parents do-they worry about their children when they're away from home. But I didn't have that fear about David.”

His dad even lifted the parental restraints at the age of 16.

When David passed, his mom recounts, the dean of the school sent a letter to them which noted that David was such a wonderful person that while the guys would be rushing past, David would stop every morning and talk to his two-year-old when he was coming out of class.

“The other guys just waved and kept going,” Ms. Bruce recounted. “But David would stop and I thought that was so special.”

She still has the letter.

David worked with the Ronald McDonald Special Olympics when he was still in high school (Calvert Hall College), was told by a priest he should go into the priesthood, carried ballots and forms to those who were sick or shut-in at the time of elections, did repairs in homes and apartments for the elderly, and founded the Black Awareness Club at his high school and served as its president.

They still have a dance in his honor at his high school.

She remembers him telling her that's what he wanted to do.