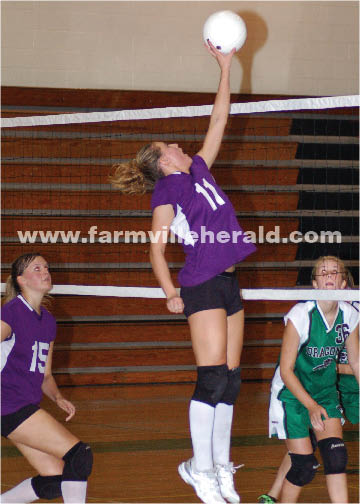 Given the relative ease the Lady Eagles won in sets two, three and four, set one's result does stick out like a sore thumb. For PECHS head coach Bruce Bogese, he used the opening set as a coachable moment.

“We weren't hitting the ball in play,” said Bogese, who added that in order to score a point, the ball first has to be in play. “[Our starters] were hitting hard, but they weren't putting it in play.

“With all that said, I have to give them credit. They pulled it together in the second set, and did what they were supposed to do. I'm pleased with how they responded.”

It didn't take long for the Lady Eagles to show Bogese that they had gotten his message loud and clear. Prince Edward (10-2, 1-0 SSD) opened the second set with a 10-0 run that included two kills and a point saving dig by Megan Thomas.

Prince Edward maintained the comfortable lead for much of the set. A kill by Rose Hargrove gave PE a 20-11 advantage. Park View scored seven of the next eight points to pull as close as 21-18, but a kill by Thomas gave the Lady Eagles the serve for good, as they closed the set with a 4-0 run.

Prince Edward again opened up a big lead in the third set, only to hold off a late Park View rally. PE held a 23-11 lead, before Park View rattled off five consecutive points. Prince Edward snapped the run to push the score to 24-16, but Park View scored four more to pull to within 24-20, before Taylor Reinson closed the set with a kill.

Despite falling behind 2-1, Park View seemed to have the momentum heading into the fourth set. The Lady Dragons jumped out to an early lead, and despite being tied a number of times, never let PE take a lead until Thomas put the Lady Eagles ahead 14-13. That was part of an 8-0 run by the Lady Eagles on the serve of Hargrove. Just prior to the run, Prince Edward had lost a point on a questionable call that was ruled in, but maintained focus to win the serve and start the big run to take the lead for good.

“I can't say enough about how well I thought we played in the last three games,” said Bogese. “Our seniors really stepped up and came through for us. We played those like we've played all year, pass, set, attack and get it in.

“We got the first district match out of the way. It's a good win for us. We haven't beaten Park View over here in quite some time.”

Prince Edward was scheduled to host Brunswick on Thursday night, and will travel to Greensville on Tuesday, before returning home to host Buckingham next Thursday in the final non-district match for the Lady Eagles.

Fuqua To Induct Five Into Hall of Fame