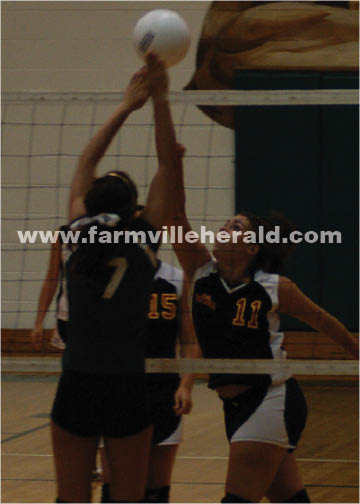 BLACKSTONE – To put it simply, the Fuqua School volleyball team was upended on the road at Kenston Forest 3-2 on Tuesday night in the season-opening contest for the Lady Falcons.

How the two teams got to the final result was an entirely different matter.

To say the rhythm was syncopated, would be a gross understatement.

Over the course of a five-set match, action was stopped numerous times for large delays because of rotation errors and scoring issues with the home book that delayed the match by over 30 minutes.

The delays and errors were so numerous that Fuqua School head coach Lora Smith debated pulling her team off the floor and protesting the match in the third set.

“I wanted to protest, but the girls didn't want to,” said Smith. “I let them decide, and that's what you would want your kids to say, but in light of what was going on, I probably should've overruled them.

“We learned a lesson.”

The sideshow between the scoring table and the floor referee overshadowed a competitive match by a much-improved Kenston Forest team. Last year, Fuqua rolled to a 3-0 victory over the Kavaliers in Blackstone.

“They have come a long way in a short amount of time,” said Smith. “You don't want to take away from that. Obviously, when you lose, you don't feel you played your best, but they certainly had something to say about that.”

Fuqua jumped out to a large early lead in the first set, at one point holding a 13-7 lead, before Kenston Forest rallied to take the lead at what the scoreboard read 14-13, though during that rally, Fuqua was awarded a point that was later credited, however, no point was deducted from the Kenston Forest score. With Kenston Forest up 20-16 (after Fuqua's score was adjusted), Fuqua junior hitter Taylor Schmidt registered two consecutive kills to pull the Lady Falcons within two at 20-18. However, KF pulled back out to a 23-18 lead. Fuqua rallied to 24-23, but a return that was about six-inches wide gave the Kavaliers the match at 25-23.

Kenston Forest carried the momentum well into the second game, and was up 22-17, before senior Charlotte Cave, who served a perfect 25-0 game against KF last year, rattled off a 7-0 rally to take a 25-22 lead to knot the match at one set apiece.

The third set was delayed numerous times by scorebook adjustments. Fuqua was awarded possession and a point to go ahead 11-9 on a rotation error by Kenston Forest. An ace by Caroline Wiles put the Lady Falcons up by three points. Another error point was given to the Lady Falcons, before a lengthy delay. After another delay was called, Fuqua's scorekeepers left the scorer's table. During a time-out called by Fuqua, Smith talked with her team about protesting the match.

The team decided against it, and for a while it looked to be the right decision for the visitors. With FS trailing 23-20, Cave rotated back into the serve and put together a run to put the Lady Falcons back up 24-23. KF tied the set at 24 apiece, but a kill by Schmidt gave the Lady Falcons the serve, and eventually the set 26-24.

The fifth set was played as closely as the rest of the match, with neither team getting more than a two-point lead.

An ace by Tatum Davis and a kill by Schmidt gave the Lady Falcons a 13-11 lead, but Kenston Forest rallied with three consecutive points to take a 14-13 lead. The two teams traded points, with FS taking a 16-15 advantage, but KF scored the final three points to take the set and the match 17-15.

“This will likely hurt us down the road,” said Smith. “It's a league game, so we're going to have to fight a little harder, and get one back somewhere along the way.”

Fuqua was scheduled to host Richmond Christian on Thursday night, and will host Southampton Academy on Tuesday, September 13.