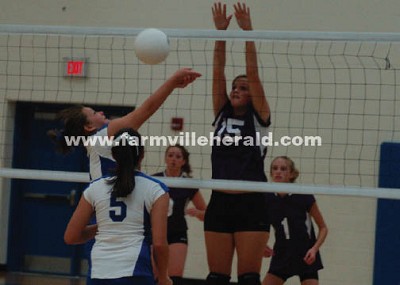 CUMBERLAND – The Prince Edward County High School volleyball team shook off a road loss to Randolph-Henry with a 3-0 victory over Cumberland on Tuesday night.

Prince Edward set the tone early by scoring the first six points in the first set. At one point, the Lady Eagles held a 13-2 lead, before going on to the commanding victory.

Cumberland scored the first two points in the second set, before Prince Edward recovered to jump out to an 11-5 lead and take control of the match.

“We played well tonight and took control early” said PECHS head coach Bruce Bogese. “The score may not be reflective of it, but Cumberland is an improved team. They looked good in that third set, but we were able to play loose and score with them until we got a run to put it away.”

Though the score looked similar in the third set, Cumberland second-year head coach Heather Sutton did note improvement in how the Lady Dukes moved in the final set.

“We didn't move at all in those first two,” said Sullivan. “Prince Edward moves so well off the ball, and we knew that we were going to have to match that, and we didn't. We probably wouldn't win those first two sets if we were to have moved and communicated like we should've, but the scores would've been closer.”

Both teams enter the 2011 season in vastly different looking districts than what they played in during the 2010 campaign. For PE, the Southside went from eight teams to five, and shed three of its most powerful programs in Bluestone, Nottoway and Powhatan. Meanwhile, the James River District picked up Bluestone and Nottoway along with former volleyball power Goochland.

“It's going to be a lot tougher for us this season, but I'd like to think that we've also improved,” said Sutton, whose team picked up a season-opening victory 3-0 over Central Virginia Home School last week. “I think we have a competitive team this year. The girls have worked hard and have been motivated to improve individually and as a team.”

In a departure from recent years, Cumberland (1-1) has just one sophomore on the squad, four juniors and eight seniors.

For some of the seniors, it's their fourth season on the varsity. They've grown in volleyball knowledge and physically to where they have a height advantage at the net.

“We don't quite know how to capitalize on that yet,” said Sutton. “We have a couple girls who are close to six feet, and they can jump to spike the ball.

“They've yet to have that a-ha moment. For some of them it's starting to go off. I think we saw tonight that they can do it, but the trick is to get them to believe they can.”

For Prince Edward, the Lady Eagles should benefit by the three departures from the league. With perennial favorite Powhatan gone to the Jefferson District and competitive equals Nottoway and Bluestone to the James River, the district championship chase should be wide-open between PE, Park View, Greensville and last year's runners-up, Southampton.

The Lady Eagles lost seven seniors from 2010 to graduation, but return six seniors to this year's squad.

“We lost a lot, but we still have a lot coming back,” said Bogese. “This is a good group of kids, and so far they're doing well.”

Prince Edward doesn't have the power up front that perhaps PE teams of the past had, but the Lady Eagles are still aggressive. Prince Edward is employing a three-setter offense.

“That allows anybody to be able to hit when they can,” said Bogese. “It's something a little different, but the three have played well in the system so far.”

One other non-conventional belief Bogese has is that the team does not have to go through a bump-set-spike progression.

“Just because the ball just came over the net, that doesn't always mean you have to go through a pass-set-attack offense. If a ball comes across the net softly, it's okay to send it back if you feel you can make good contact.”

With a wide-open race for the Southside championship, there will be very little room for error when Prince Edward's district schedule rolls around.

“When the ball is over on the other side of the net, you need to think of your opponent as the best team in the state, and work to position yourself for their attack accordingly. If you do that, you're going to give yourself a chance to get a play on the ball.”

Prince Edward (4-1) defeated Lunenburg 3-1 on Wednesday night, and will host former district rival Nottoway on September 6 at the PECHS Gymnasium.

Cumberland's return match at Central Virginia Home School originally scheduled for Thursday night has been cancelled due to lasting effects in the Richmond area from Hurricane Irene. Cumberland will begin JRD play on September 7 at home against Lunenburg.