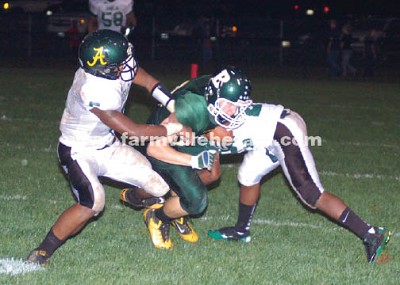 BUCKINGHAM – It's not often that the Buckingham County High School football team feels the sting of a defeat. It's even more rare for the Knights to have to suffer through a lopsided loss like Monday's 36-7 to Amelia.

Buckingham, which had made a habit all season of getting onto its opponents from the opening kickoff with an aggressive style, looked to be a step slow to a motivated Amelia squad that dominated their opponents from start to finish.

“We knew it was going to be a tough game,” said BCHS head coach Craig Gill. “They handled us up front on the line. They blocked and tackled well all night.

Amelia (4-0, 1-0 JRD) set the tone on Buckingham's first offensive drive of the game. The Knights (3-1, 0-1 JRD) had scored on their opening drive in their three previous games. Monday night, they went three-and-out.

It was Amelia that quickly scored on a 33-yard touchdown run by Dante Bournes a little over two and a half minutes into the contest.

Amelia senior quarterback AJ Royal put the Raiders up 14-0 on a four-yard run with 4:40 left to play in the first quarter.

Buckingham, which had won 16-consecutive home games, played Amelia even for much of the second quarter until Curtis Williams returned a BCHS punt 60 yards for a touchdown with 1:45 to play in the half.

Bournes helped the Raiders put the game out of reach on Amelia's first drive of the third quarter on a three-yard run. A two-point conversion gave ACHS a 30-0 lead.

Buckingham's lone big offensive play came on the first play of their next drive. Sophomore tailback Kenneth Johnson broke a 58-yard touchdown run up the middle for the Knights' only score of the night with 7:29 to play in the third.

A rejuvenated Buckingham defense forced a stop, and the Knights drove to the ACHS 30-yard line before turning the ball over on downs on the Amelia 35, which pretty much ended any hopes of a Buckingham comeback.

Quentin Hite scored Amelia's final touchdown of the night on a 42-yard run on an inside reverse.

“We wanted to get on them early and we did,” said Amelia County first-year head coach Brad Bradley. “Our offensive and defensive lines played a tremendous game tonight, and our backs ran well. Every one of our kids played a great game tonight.”

For the Knights, losing the game wasn't what was considered to be an upset. How they lost was.

“They got up on us, and we didn't answer,” said Gill. “Maybe this woke us up. We've got to come out and be ready to go every night.”

Buckingham was held to just 166 yards on the evening. Senior quarterback Tarian Ayers was 10-23 passing for 63 yards, and rushed ten times for 38 yards, not counting sack yardage. Johnson rushed five times for 65 yards, with one of those being the 59-yard touchdown. Freshman tailback Kyree Koonce led the Knights with four catches for 15 yards. Jesse Hickman had two catches for 30 yards and LA Briley had two grabs for 26 yards.

“I don't think moving the game to Monday made much of a difference,” said Gill. “I do think we were ready to play on Friday, but there was standing water on the field up to the hashmarks on Friday afternoon. It wouldn't have been fair to either team to play it then. You don't want to run the risk of getting anybody hurt unnecessarily.”

Buckingham will have a short week to prepare for a homecoming tilt with James River District newbie Nottoway on Friday at 7 p.m.

“We've got to put this one behind us,” said Gill. “We should want to. Nottoway has a great running back that's as fast as anyone in the state, and they always have size. It's going to be a tough one, for sure.”