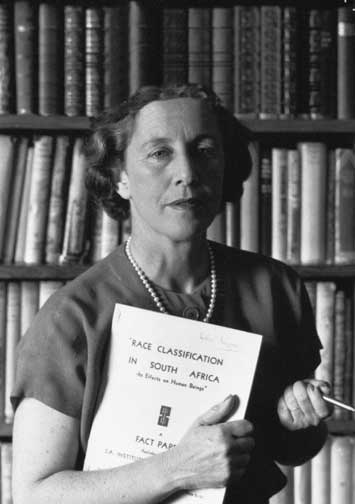 Helen Suzman, a life-long citizen of South Africa, was a member of the South African Parliament for 36 years, from 1953-1989. Suzman was one of South Africa's most vociferous and energetic opponents of apartheid. She was the sole opposition voice condemning apartheid during the 13-year period (1961-1974) when she was the governing body's only member of the Progressive Party.

Her lonely and tenacious fight for human rights and dignity led her to a lifelong friendship with Nelson Mandela. On Suzman's 90th birthday, Mandela wrote, “She is a person appreciated by all South Africans. Her courage, integrity and principled commitment to justice have marked her as one of the outstanding figures of our history.”

The exhibition explores nearly four decades of Suzman's life and vision through photographs, personal letters, quotations from speeches, and news articles. Suzman was nominated twice for the Nobel Peace Price in recognition of her contribution to the pursuit of justice in South Africa. She received the United Nations Award of the International League for Human Rights in 1978. In 1989, Queen Elizabeth made her an Honorary Dame Commander (Civil Division) of the Order of the British Empire.

Suzman died on January 1, 2009, at the age of 91. Flags across South Africa were flown at half-mast in her honor.

In conjunction with the exhibit, Mark Suzman will speak on October 3, 4:30 PM, at the museum. The exhibit will continue through Saturday, October 22. The Esther Atkinson Museum is open Monday through Friday, 12:30 to 5 p.m. For Saturdays and other times, call 434-223-6134