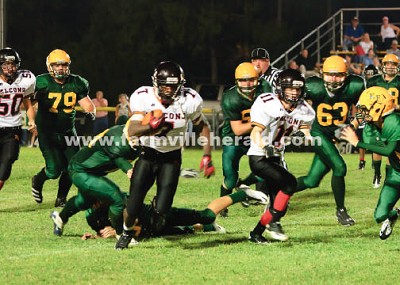 The Fuqua School football team rolled to 2-0 on the season, and 2-0 in the Virginia Commonwealth Conference with a 41-13 victory at Kenston Forest last Friday. The one-two-punch of seniors Charles Williams and Larry Haskins combined for 356 yards on the evening. Williams, seen above following the blocks of fullback Matthew McKay, rushed for 211 yards and four touchdowns on only 13 carries, while Haskins accounted for 145 yards rushing on 14 touches. Junior quarterback Carter Cunningham returned from a preseason injury to throw for a touchdown to Davis Cyrus. Haskins led the defense with five tackles and an interception, and Caleb Gaines had an interception he returned for a touchdown to account for the Falcons' scoring. The Falcons, who entered the season banged up, will have a bye week to heal injuries, before hosting Broadwater Academy on September 16 at Gilmer Field in what will be Fuqua's home opener. (Photo Courtesy of Ted Hodges)