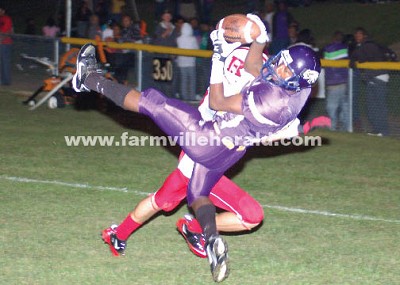 FARMVILLE – Prince Edward County High School head football coach James Ford saw a difference in his football team leading up to the Eagles' non-district game against Rustburg. And in the end, it produced a different result – a victory. A 13-12 victory.

“When we were looking at film, the guys were all saying 'coach we can beat this team,'” said Ford. “They've said that all year, but this time I could see that there was confidence behind what they were saying.”

Prince Edward (1-3), which had suffered through back-to-back 1-9 seasons, with the only victories in that span coming to a Bluestone team that was in a similar situation, had to take a crash course in learning how to hold on for a win – along with getting some good fortune as well.

“We really worked in practice all week on making our opponents react to us, rather than us reacting to them. Our guys played well, and put together two halves. We won the turnover battle (4-2), and our two didn't hurt us. I was concerned, because in film, we saw that they managed to score on every turnover they got, but our defense stepped up when they needed to.”

The Eagles trailed early on, and were down 10-7 for much of the game until junior quarterback Tavon Adams hit a diving James Jones in the back corner of the end zone for the go-ahead touchdown midway through the fourth quarter.

Then, the Eagles had to hold on against several challenges by Rustburg late in the game. The Red Devils drove to the PE five-yard-line with a little over two minutes remaining only to fumble the ball back to the Eagles on the PE nine-yard-line.

Needing to run the clock out, Prince Edward showed that it had been a while since the Eagles had to grind out the clock. Their first play from scrimmage was a seven-yard loss, back to the two. On fourth down, the Eagles elected to take a safety, rather than to risk a blocked punt or return, closing the game to 13-12 with 1:01 left.

Rustburg (2-2) returned the ensuing kickoff to midfield, and moved down into scoring position as time ran down. With 20 seconds remaining, the Red Devils attempted a 27-yard field goal that went just wide-left – handing the Eagles their first victory over an opponent with a winning record since October 3, 2008 (a 29-28 victory over Brunswick).

“I'm happy for our guys who have gone through a lot. A lot of negatives. Now they have a positive.”

Jekeem Eddins led the Eagles in rushing with 107 yards on 15 carries. Adams was 6-20 passing for 102 yards and two touchdowns. Tyrek had one catch for 40 yards, Cleon Watkins had one for 38, Marquis Fitzgerald had one catch for 13 yards and Jones had the ten-yard touchdown grab.

Prince Edward has an open week this Friday before returning to face former Southside District member Powhatan. Afterward, the Eagles will get into their SSD schedule.

“The bye week is good, because we have some bumps and bruises right now. We have an extra week to prepare for Powhatan, and to get ready for district play.”

And for coming off a big victory?

“No, and I thought we may have that problem,” said Ford on Monday afternoon. “But in talking to some of the kids today, they said they enjoyed the win over the weekend, but they're already thinking about Powhatan next week.

I'm really pleased to see that mentality. We may have to get after them a little bit but it will be a change to have to bring them down a little.”

Fuqua Cruises To Win Over Broadwater