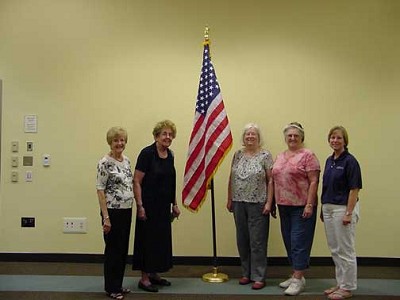 A joint venture between the Judith Randolph-Longwood Chapter, Daughters of the American Revolution, and the Ladies Auxiliary to VFW Post 7059 has resulted in a brand new American flag to grace the Farmville/Prince Edward Community Library. On Friday, August 19, the flag was presented to Peggy Epperson, director of Central Virginia Regional Library by Becky Kelly and Nancy Vick (DAR) and Peggy Emert and Sharon Perutelli (Ladies Auxiliary) Becky is the flag chairman and Nancy the regent of the local DAR chapter; Peggy is the president and Sharon the secretary of the Ladies Auxiliary.

Sharon led the group in a short program that revealed interesting information about the American flag. The first official national flag was approved by the Continental Congress on June 14, 1777; it is widely believed that Betsy Ross sewed this first flag. The flag had 13 stars and 13 stripes to represent the original 13 colonies, and it was nicknamed “Old Glory.”

President Truman officially declared June 14 Flag Day on August 3, 1949. Our flag has undergone several design changes, the most recent to add the last star when Hawaii became a state on July 4, 1960.

The current flag has 13 stripes to represent the 13 original colonies and 50 stars to represent the number of states in the Union. The red of the flag symbolizes hardiness and valor, the white symbolizes purity and innocence, and the blue represents vigilance, perseverance, and justice.

For more than 200 years, the American flag has been the symbol of our nation's strength and unity. It has been a source of pride and inspiration for millions of citizens, and it has been a prominent icon in our national history.

After sharing these facts with the assembled individuals, Sharon led the group in the first Pledge of Allegiance to be given to this particular flag.