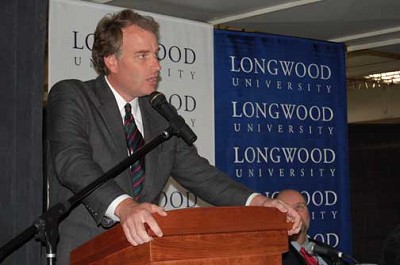 FARMVILLE – The business community made a major exhibition of itself Wednesday, with more than 200 people attending the inaugural Southern Virginia Business Expo, hosted by the Longwood Small Business Development Center (SBDC).

The daylong event at the new STEPS Centre provided networking opportunities, exhibits by individual businesses, panel discussions, breakout sessions and presentations on business strategies and the future of the region's economy.

“We need this,” said an endorsing participant, Jim Ailsworth, commenting from his Key Office Supply display in the exhibit area.

Stan Smith, of Farmville Wholesale Electric Supply Co., praised the “surprisingly well attended” business expo that included “a good cross-section of the community. Everyone seems enthusiastic. I got a lot out of the (What Comes Next For Southern Virginia) panel discussion. And it was good to see Congressman Hurt show up. A good connective meeting.”

SBDC Executive Director, Sheri R. McGuire, expressed delight at the attendance and looked to future editions of the event. “It's the first of its kind and most businesses think that they have to go to Richmond or Northern Virginia or some other place to have a business conference, to talk about these subject matters, like economics and how it affects them and how they can deal with that within their business. But now we can do that right here in southern Virginia. There's no reason that we can't. And we're excited to be a part of it and see it come together so well. The folks at STEPS have been wonderful. We're all learning from the process. We'll do it next year.”

Creating the opportunity for local entrepreneurs to gather in one place and talk about the common business issues they face was a key motivation for the SBDC and a major benefit to participants.

“I think any time you can move yourself away from the day to day of your business and work with other business owners,” Ms. McGuire said, “talking through issues, learning from other people, I think you get a good refreshment in your mind of where you want to take your business. And it's very important, I think.”

“It's great that the Small Business Development Center wanted to come in and bring this to our community,” she said, speaking beside the chamber's display at the expo, “and give all of our businesses in our community a chance to network and get what they do in their business out to the community.”

That opportunity was a catalyst for Smith's participation on Wednesday. Talking with other business people and sharing common experiences about today's economy is important, he agreed.

“It always helps, when you think you're going through something in a negative way, that you're sharing that (experience) with other people-you're not in it alone,” he reflected. “All small businesses in this area are probably experiencing similar things. Some worse than others. I think it's good for any group that's basically doing the same thing to get together, trade ideas and commiserate, in this case, but, yeah, it's a positive thing.”

Making new contacts through the networking opportunity was also a significant factor in Smith's decision to attend the business expo.

“There will be a few new relationships develop out of it. A gentleman I just met standing right here,” he said, giving an example. “Even if you come to something like this and get one new contact, one new relationship, you never know what that's going to turn into that could be a huge benefit to you in the future. That's what networking's all about.

Ms. Whitus is already looking forward to future installments of the business expo. “It's great to be a part of it. They've done a wonderful job,” she said of the SBDC, “and I think that in years to come it will be no parking spaces and the event will be full.”

Most of the parking spaces were full on Wednesday and Rep. Hurt arrived in one of the vehicles as part of his day in the area.

“I don't think that there's anything that we can do to help revive our economy than to support small business,” he told the 200-plus gathering. “And, in my opinion, the way that we do that is you figure out what it is the government's doing that creates an obstacle to your success and then we do all we can to minimize that or remove it. And that is something I've been dedicated to since I was sworn in in January.”

The Republican focused on the need for “certainty in the marketplace” which not be attained through a series of temporary economic measures in Congress that will only create greater uncertainty.

What the freshman congressman described as excessive and unnecessary government regulations as a suffocator of small business and, therefore, the economy were at the forefront of the Hampden-Sydney College graduate's remarks.

“Federal regulatory agencies that regulate him and his operation on a hillside in Nelson County where he and his family have been growing peaches for the last five generations. And he said, 'Mr. Hurt, all I'm trying to do is grow peaches. What is it the federal government adds to this process?'

The example of that Nelson County peach farmer is a “very good way to express what the American people understand is the barrier between a struggling economy and the growing, vibrant economy,” Rep. Hurt said, “that we all desperately need.”

Government must take an assessment of what its priorities are, what it can afford to do, “and above all what are the costs and what are the benefits of the regulations that are being adopted in Washington, D.C. and in Richmond and at the local level. It's a question that we all must, as people who are represented in our local government, our state government and our federal government, it's a question that we all must demand answers from those who represent us.”

From peaches to a banana on a ladder, the Southern Virginia Business Expo followed Rep. Hurt with its keynote speaker, Gayle Turner, Wednesday, who focused on having the “heart to act” despite the uncertainty in Washington, D.C. and the world and the various aspects of business life, and life in general, that one cannot control.

If you have the heart and have the will, said Turner, managing consultant of Catch Your Limit's Richmond office, “you can make this happen.”

And “this” is the future you envision for yourself and your business.

When asked what excited him most in the marketplace today, he replied, “The most important thing is within us.”

Turner did use a banana on a ladder for a prop to demonstrate a point about business culture-the need to think outside the rut, not like monkeys conditioned to give up trying to attain their prized food.

“I am hoping to reach you at an emotional level today that will encourage you to do two things,” said Turner, who combined humor and wisdom to great effect. “If by the end of this calendar year you have uncovered a demand, somewhere within the market that you serve, that you could serve profitably and generate a sufficient demand to hire one additional person, then I've been extremely successful…

“…The second goal that I have is that I would like you to leave here today,” he said, “with the sense that 'I can.'

“And so the question here is for all of us to get a clear picture of just what it is I can do and then go find a place to do it.”

As the SBDC did at the STEPS Centre Wednesday on behalf of the business community.