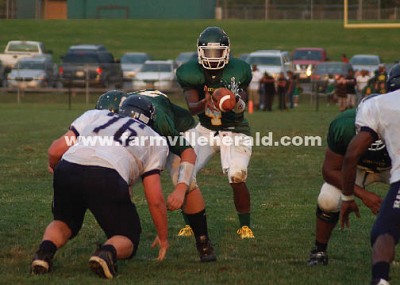 BUCKINGHAM – If as some people have predicted that the James River District will be one of the toughest football leagues in the state this fall, the Buckingham County High School football team got a good idea of where it stands just one week into the season with a 48-31 victory over non-district rival Appomattox last Friday night.

“We beat a good football team in Appomattox,” said BCHS head coach Craig Gill. “They're going to win a lot of ballgames. We knew they were gunning for us since the last two years we were able to beat them in close contests.”

It didn't take Buckingham long, three plays in fact, to prove that it will have one of the most potent offenses in the area when senior quarterback Tarian Ayers hit a wide-open Landon Allen for a 44-yard touchdown just 55 seconds into the 2011 season.

Buckingham's defense had trouble adjusting to the Raiders' misdirection offense. Aided by a botched snap on a punt attempt that sent the Appomattox punter scrambling for a first down, the Raiders scored with 4:11 remaining in the first quarter.

Just under three-minutes later, Ayers capped a short drive with a three-yard touchdown dive on fourth-and-goal.

With a little over seven minutes to play in the first half, Buckingham sophomore tailback Kenneth Johnson scored on a one-yard touchdown to put the Knights up 20-7 moments before a brief, but potent rain shower hit the area.

Buckingham recovered an Appomattox fumble on the Raiders' 40-yard-line. On the next play, Johnson rushed up the middle for an eight-yard gain. With the game close to getting out-of-hand, Appomattox was able to stop the Knights at its 35-yard line. Moments later, Josh Wilson broke open on a 65-yard touchdown run to pull ACHS back to within one score at 21-13 with 3:50 to play in the half.

Buckingham fumbled on its next series. Appomattox recovered and almost made the Knights pay for their mistake on a touchdown pass into the end zone on fourth-and-11, but the receiver was just over the back line when he made the grab, giving the ball back to the Knights.

Buckingham dodged the bullet, and went into the half with the eight-point advantage. Appomattox received the third quarter kickoff, but fumbled the ball at its 19-yard-line. Ayers made the Raiders pay for their mistake on the next play with a 19-yard touchdown scamper around the left side.

Appomattox answered with a 18-yard touchdown run of its own with 7:24 left in the third. Deion Edwards broke containment and rushed down the far sideline for a score to cut Buckingham's lead to 27-19 after the Raiders' two-point attempt failed.

Appomattox closed to within two points on Buckingham's next possession. Deqwan Trent picked off an errant Ayers pass and returned it for an interception.

With 2:18 left in the third quarter, Ayers scored again on a 19-yard run around the left side on what looked to be an almost identical play to the one he scored on earlier in the quarter. Appomattox was in better position to defend the play, but a block by Jesse Hickman freed up Ayers to run into the end zone unscathed.

Buckingham's Thomas Midkiff recovered an Appomattox fumble on the Raiders' ensuing possession, and with 9:30 to play in the contest, Ayers pretty much put the game out of reach with a touchdown run to extend Buckingham's lead to 41-25.

Freshman tailback Kyree Koonce put an exclamation point on the game with a 68-yard touchdown run to put the Knights up 48-25. Appomattox added its final score with 48 seconds left on a touchdown pass from Edwards to Jamie Mosley.

“Overall, I'm happy with the victory,” said Gill. “We had some missed opportunities on offense and some things we need to address, and on defense we need to do a better job on tackling in the open field. The misdirection Appomattox runs causes our defenders to maintain their assignments. If they go to the wrong guy, or over run an assignment, that can lead to big plays.

Buckingham will be idle this Friday, and will return to its schedule on September 9 at home against Prince Edward.

“We have some things we need to iron out,” said Gill. “Fortunately, we don't have any injuries, but we're going to use this week to work on our conditioning, and kicking game. We've gotten off to a good start. Now, we've got to work on getting better.”