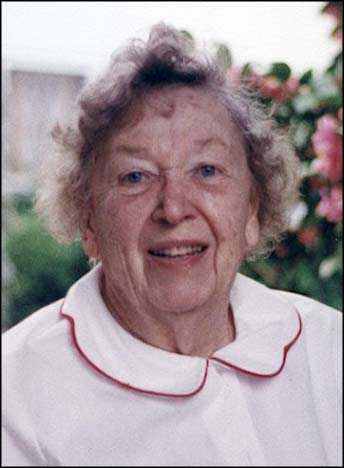 AUGUST 11 – Dorothy Glover Johns, of Farmville, died Saturday, August 6, 2011 at the age of 96 after a long, full life. She was the wife of Melville M. Johns for 50 years until his death in 1987. She was born on January 18, 1915 in Arvonia to Dr. Perkins and Mable Pitts Glover. She often shared delightful stories of growing up there with her late brother, Price Glover, and a large family of grandparents, aunts, uncles and cousins. She told tales of making house calls in a horse and buggy through the driving snow to deliver babies and tend the sick with her father.

Mrs. Johns attended Westhampton College and was a graduate of Longwood College where she was a member of Alpha Sigma Alpha Sorority.

She was a member of Farmville Presbyterian Church. She was a member of the Judith Randolph Chapter of the Daughters of the American Revolution, the Garden Study Club and for many years was active in the Longwood College Alumni Association. She had a quick wit and charming sense of humor, loved her family, her home and her garden, and was a respected antiquarian. Her camellias bloomed like clockwork every year.

Services will be held at 2 p.m., Wednesday, August 17 at Farmville Presbyterian Church with interment following at Grace Episcopal Church in Bremo.