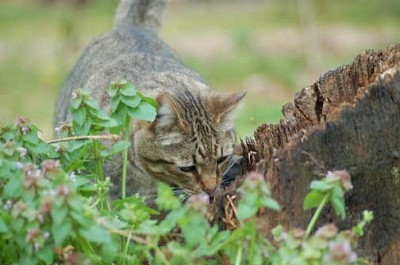 How much wood does a woodchuck chuck?

Not as much as I do – chasing them out of my garden, that is.

Often referred to as groundhogs, woodchucks seldom “chuck” wood at all – unless it's a garden marker with a row of succulent spring peas or snap beans on the other side.

Unfortunately, after a visit from “chuck,” a gardener is apt to find bare earth where a ready-to-harvest crop had been.

The Woodchuck Wars at Elam began earlier in the season when the peas were up and running – running for their lives as it turned out.

“Do these pea vines look shorter than they did yesterday,” I asked my spouse during a springtime garden walk.

Sure enough, tell-tell signs of nibbling were evident about half-way down the row.

“There's no way a deer got in,” I pointed to the 10-foot fence that encircles our garden. “Besides, a deer would have eaten all the pea plants,” I added.

These plants had obviously been attacked from ground level – groundhog level to be precise.

An image from earlier in the year suddenly came into focus. A chubby little groundhog had been hibernating under the old oak tree in front of the house, and on sunny days it often came outside to sit on his haunches in the sun.

Could that woodchuck have chucked the woods in favor of my garden?

Is Groundhog Day on the calendar?

Of course, to both questions!

The following night my husband positioned his night vision camera, complete with camouflage, in the garden. Hopefully the culprit – and its modus operandi – would be captured on film.

The next morning we flipped through the digital images on the screen. The motion-activated camera had recorded numerous shots of crows and quite a few candid shots of Sylvester the cat. The final mug shot, however, was a familiar one. It was the image I remembered from last winter of a furry little rodent – only bigger.

Mr. Groundhog had obviously been eating well, at our expense.

How was he getting in the garden? The camera revealed this garden pest was using his head, not to mention the gate. On further inspection I discovered a gap of about six inches between the gatepost and the garden gate.

A piece of scrap wood and some nails took care of that entrance, but it was only the first volley in the continuing groundhog assault. Over the next few weeks gardening became more of a game of “raid and repair” as I reconnoitered the groundhog's newest means of access to the garden and devised various means of blocking it. (I still harbor the suspicion that groundhogs can climb fences and possibly even fly!)

About mid-July things came to a head (not among the cabbages – they were already groundhog slaw). My carefully cultivated corn was almost ready to pick, so I began patrolling the garden – both day and night.

I was beginning to wonder if the groundhog had gone on vacation. There was no sign of him – neither hide nor hair.

Hiding, however, is what groundhogs do best, and “hair” – I'd almost forgotten the groundhog creed: “here today, gone tomorrow.”

The next morning when I came to the garden I discovered quite a few gnawed-on corncobs between the rows. Our herbivorous hit man even had the audacity to carry entire stalks, corn and all, through the fence. I'm surprised he didn't have a pot of boiling water and a saltshaker waiting on the other side.

At least I knew the corn was ready to pick – which I did that very day.

Once the corn was in the freezer I relaxed my vigilance. The only major harvest remaining in the garden was tomatoes and grapes. I'm fairly certain groundhogs aren't overly fond of tomatoes, and the grape vines were well above groundhog level (unless, of course, groundhogs really do fly).

“You know, I haven't seen a groundhog in awhile,” my spouse observed as we were sitting on the porch enjoying the evening. “But I have seen quite a few owls.”

A family of owls had recently taken up residence in an oak tree next to the garden. Early in the morning I often saw them perching on a fencepost before swooping along the ground to hunt for breakfast. Might that breakfast include “groundhog and eggs?”

I googled “what owls eat,” and this is what it said: “The favorite food of North American owls is insects and rodents.”

“Do you really think an owl ate the groundhog?” my husband asked as a now familiar “hoot-hoot” filled the evening air.

“Could be,” I said. “Mother Nature does have a way of balancing the books.”

I'm not sure if that includes cookbooks.

I can only hope that owls don't develop a taste for sweet corn.