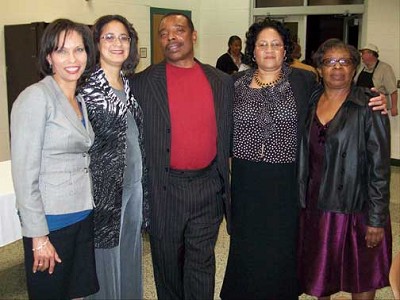 Celebrating the past, present, and future, the banquet featured a traveling black history display of books and pictorial exhibit of Buckingham County Black History. Joyce Gooden, a member of the Buckingham Training School Commemoration, Incorporated, provided an overview of the display.

Freedom of Choice: The Trailblazers was the theme for this year's banquet and offered an opportunity to recognize several African American students and teachers for their efforts during the integration of the Buckingham County Public Schools in 1965; and, ones who later answered the call to freedom of choice prior to 1970.

According to minutes of the Buckingham County School Board, dated September 1, 1965, then Superintendent of Schools Irving Driscoll reported to the school board that the first Freedom of Choice student response included “2 Negro girls in the 8th grade at Central High School, 2 Negro girls in the 1st grade at Dillwyn Elementary School, [and] 1 Negro boy in the 2nd grade at Dillwyn Elementary School.”

All five expressed their experiences as being great with no racial problems from teachers, staff, or students. During the banquet, the five were honored with certificates and trophies.

Offering an overview of their experiences, they shared that it was “not as bad as I anticipated”; “met some life-time acquaintances”; “teachers showed love and kindness”; “challenging with a sense of accomplishment”; “a good, pleasant experience”; and “a new adventure but a good well planned one with determination to make it work.”

Unable to attend, Evelyn Cooper sent reflections of her first day in the integrated school system. She shared, “I had forty students in my first grade class, which consisted of three black, one Native American and thirty-six white students. The first day was a nightmare. When I walked into my classroom, I was confronted with a room full of students, three or four of them were crying and parents standing along the walls waiting to talk to me. That year I learned the real meaning of patience. It was a strategic year, yet one that created many academic possibilities and promises for black children. It opened the doors for a better understanding and appreciation for blacks in the community as well as in the world.”

Nancy Allen also sent recollections of her first day in the classroom. She wrote, “My first day of teaching was surprising, hectic, dedicated and committed to helping my class to get used to a new schedule in their little lives. After chasing down and comforting one of my students who dashed out of my class, being overwhelmed by school and a black teacher, I had to overcome the first day teaching experience jitters. Both the children and I were seeking a balance of comfort in a completely different world. At that moment, the children as well as I forgot about the color of our skin and focused on survival. It was then that I knew that children are the bosom of each and all success stories in education.”

Mary E. Brown-Shelton was on hand to personally share her memories from 1966. She stated, “I received a letter from the superintendent, Mr. Irving Driscoll, stating that I would be one of the first black teachers to transfer from S.J. Ellis Elementary School to Dillwyn Primary School. The toughest part was leaving my students, the principal, Mr. Allen Gooden, Jr. and the teachers.

“On the first day of school, with some apprehension, I said that I would do my best to challenge my students. My family was very supportive and my new principal, Mr. John Morgan, and the teachers were very cooperative.

“The students were students just like those I had taught at S.J. Ellis. It was a positive experience and in some way I hope I contributed to the promotion of racial diversity and the achievement of Dr. Martin Luther King's dream of a more just society.”

Ruby Johnson was also present and shared, “It was a joy and pleasure to enrich the lives of eager first graders leaving home for the first time. To see the light come on when they mastered a skill was a delight.

“In the summer of 1968, I was shocked when I received my teaching assignment for Buckingham Primary School. I was very nervous about meeting my students. On that first day, I discovered that my students were eager to learn and not concerned about race. They respected the two black students in the class and me.

“There were no racial problems, and I made lasting friendships. My teaching career ended at Buckingham Primary School, and I am forever grateful for the love and respect received there.”

During the banquet, the Reverend Robert Parson was recognized for his outstanding efforts in seeking parents to sign for their children to attend the white schools.

Ophelia Perkins Foster and Loretta Austin Perkins, the first to graduate from Buckingham Central High in 1967, each received a yellow rose.

Honors also included the presentation of a framed certificate of appreciation to the Banks Family, represented by Irene Banks Rollins and Rosemary Gregory Hughes, in memory of Carolyn Y. Banks, the first African American valedictorian to graduate from Buckingham Central High in 1969.

A banquet recognizing those who helped blaze the trail for generations to come demonstrated that this rural county, located in the heart of Virginia, had students, parents, teachers and administrators who lead the way with heart and humanity.

[The Herald expresses its appreciation to Vera Cooke Merritt for providing this overview of the Black History Banquet.]