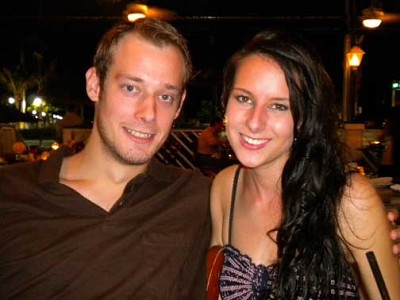 Mr. and Mrs. Gregory and Gail Henderson, of Prince Edward, proudly announce the engagement of their daughter, Ashley May Henderson, to Daniel Alvin Yates Jr., son of Daniel and Paulette Yates, of King William.

Ashley, a 2004 graduate of Prince Edward County High School, a 2006 graduate of SVCC, and a 2009 graduate of Longwood University, received a bachelor of science degree in biology. She is currently working as a zookeeper of carnivores at the Palm Beach Zoo, in West Palm Beach, FL. She is the granddaughter of Virginia and the late George Lumsden Jr., of Fairfax, and the late Leon and Bessie Henderson, of Farmville.

Daniel, brother of the Alpha Chi Rho Fraternity of Longwood University, is a 2002 graduate of West Point High School, attended Longwood University from 2002-2007 pursuing a bachelor of science degree in economics and was a 2009 graduate of SVCC with an associate's degree in business administration. He is currently working for JEZ Capitol, an investment firm in Wellington, FL, as a stockbroker. He is the grandson of Alexander and Ruth Fostek, of New Kent, and Shelby Yates, of New Kent. Great-grandparents are Paul and Sophie Dean, of New Kent.

The happy couple will be married on December 3.