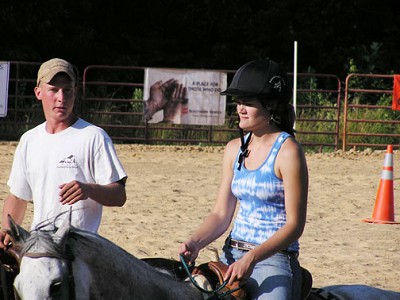 Jamestown Livery Stable in Rice held their first Play Day Horse Show on Saturday, June 25, with a full crowd of spectators on a hill overlooking the arena cheering on riders competing for cash prizes and ribbons donated by local business sponsors.

“We want this to be like a county fair,” proclaimed Hicksie Wells, co-owners and operators of Jamestown Livery Stable, “just like the ones I remember growing up in Rice, when the whole family was involved.”

The spacious arena was primed for a full day of Gymkhana and Traditional Speed Classes for Pee Wee (under 11), Youth (under 18) and Open (any age) riders. The Jackpot Classes began at 5 p.m. The Jackpot races are for the advanced riders who can tap the full physical ability of their horses. The “big money” (70% of the total entry fees plus $100 added by the sponsors) was set for the Matched Race Speed Barrel race that finished the show. The Matched Race Speed Barrel, also fondly called Blood and Guts, involves two riders racing toward two separate barrels head to head, then around the barrels and back to the finish line.

Riders came from as far as 60 miles away to compete, but the showdown at the end of the day came down to two local riders, Jesse Hines on Caroline and Josh Pack on Little Man.

Jesse and Josh grew up on farms in Rice that back up to each other, so they might have had this race years ago out in the pasture, but this time it was for bragging rights and money. Earlier, Jesse won Adult Speed Champion, but Josh, who regularly competes with Little Man and takes home winnings, decided to rest in the shade before the final race.

With a “One, Two, Three, GO,” the final, “winner takes all” race was on. Caroline exploded off the starting line. At the barrels Caroline and Little Man were neck and neck, where they both turned hard and at such a pitch that the ground gave way under Caroline. Jesse stayed in the saddle as Caroline went down, but she quickly rose from the sandy arena floor. Josh and Little Man crossed the finish first.

Jamestown Livery Stables has tentatively scheduled their next horse show for July 23. For more information contact Lisa Wells at (434)390-0646.