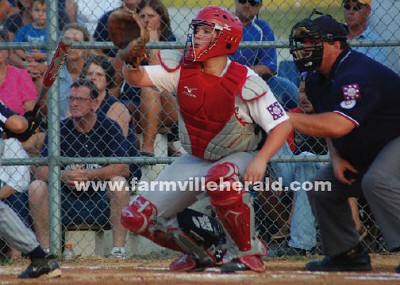 The PEFYA All-Stars defeated Blackstone in the opening game on the first day 6-5, but fell to Charlotte 8-5 on Sunday to move into Monday's elimination game against Lunenburg.

Even so, both games ended with the tying run at the plate.

“We fell apart in those two innings,” said PE Farmville manager Clint Roach. “We couldn't complete the comeback. The boys are better than what we showed. They know it, and so do I.”

Against Blackstone on the tournaments's first day, PE Farmville jumped out to a 2-0 lead with single runs in each of the first two innings. Austin Orange drew a walk and came around to score in the first inning, and Matthan Drew walked to lead off the second and later scored on a sacrifice bunt.

Blackstone scored two runs in the home half of the second inning, but Prince Edward Farmville answered with three more runs in the top of the third.

Leadoff hitter Xavier White belted a two-run home run that also scored Clay Osborn, who rolled over the PEFYA line-up with a one-out walk. Orange singled and later scored on a base hit by Matthew Fitts.

Both teams settled down in the middle innings, but Blackstone leadoff hitter Josh Baughan tied the game at five-all with a two-out three-run home run.

Prince Edward Farmville retook the lead in the top of the sixth on a solo home run from Jacob Fisher, and White came on in relief to close the door on the mound for PE Farmville. The winning run reached base for Blackstone, but a 5-4-3 double play changed the momentum back to PE Farmville, which advanced on a fly ball to center field.

Rain rolled in following PE Farmville's victory over Blackstone on Friday and postponed the remainder of opening day to Saturday. Due to a new rule in Dixie Youth Baseball, the extra day of rest enabled first-day pitcher Matthew Fittz to play in Sunday's game, despite having gone into the fifth inning in Friday's contest.

Even so, PE Farmville went with Walker Sanderson, who held Charlotte to just two runs through four innings. It was in the fifth when things went awry.

Orange put PE Farmville on the board on just the third pitch of the ball game with a solo home run over the centerfield fence to give PE a 1-0 lead after the first inning.

PE Farmville scored three more runs in the top of the third to take a 4-0 lead. Dillon Johnson drew a one-out walk, and moved to third on a single by White. Both came home to score on a double by Orange, who later scored on a base hit by Austin Roach.

Charlotte answered with two runs in the bottom of the third. With two outs in the inning, Hunter Hartley and John Walker, the 11th and 12th batters in the line up reached base, and were doubled home by leadoff hitter Cody Carson.

After a quiet fourth inning, PE Farmville added an apparent insurance run in the top of the fifth. White led off the inning with a walk and scored on a Roach single, but the PEFYA All-Stars left two runners on base despite having the heart of the line-up at the plate.

Charlotte, like it always seems to do, capitalized on what at first looked to be a small crack in the momentum. Starting pitcher Raleigh Duffer singled to lead off the inning, and three consecutive walks loaded the bases and scored a run. By the time the damage was done, six runs had crossed the plate, giving Charlotte an 8-5 lead.

PE Farmville managed to get the tying run to the plate with just one out, but Charlotte reliever Josh Jones managed to get a strikeout for the second out of the inning, and the game ended on a base running mistake.

Lunenburg led throughout the game against the PE Farmville All-Stars, but even after suffering through a third inning that saw PEFYA give up nine runs, the game still ended with the tying run at the plate.

Lunenburg scored two runs in the top of the second to take a 2-0 lead, before PEFYA answered with a run in the bottom half of the inning. Fisher singled and came home on a single by Clay Osborn. However, despite having the bases loaded with just one out, PE Farmville was unable to capitalize further.

Much like in the previous evening against Charlotte, Lunenburg took full advantage of PE Farmville's disappointment at the plate by scoring nine runs to apparently break the game open at 11-1.

It didn't take long for Prince Edward to get back into the game. The PEFYA All-Stars answered with six runs in the bottom of the third to close to within four runs at 11-7.

White led off the inning with a walk, and came around to score, as did Roach and Fitts. Consecutive RBI singles by Fisher and Sanderson set the table for Drew, who got PE Farmville back into the contest with a three-run blast over the right-center field fence.

Fitts held Lunenburg in check for the remainder of the contest, including a relatively quiet fourth and fifth innings. PE Farmville added two more runs in the bottom of the fifth. Roach led off the inning with a solo home run, and Fitts singled and later scored to pull PEFYA to within two runs at 11-9.

Lunenburg added an insurance run in the top of the sixth. Osborn led off the bottom of the sixth by reaching base on an infield error. A single by Roach scored Osborn, but Lunenburg was able to convert on a grounder to end the game.

“After we gave up those nine runs, I just told them to keep their heads up,” said Roach. “I went to our big boys and told them that they were the ones who would have to lead, if we were going to have a chance to get back into the game and win it. In the end, it wasn't enough, but I still give them credit for how hey stepped up.

“These guys never gave up. Not until the last out, and I knew they wouldn't. This has been the most well-mannered and behaved team. They're athletic, and in the places they're lacking, they're willing to listen and work hard to get better. And that counts as much as anything.”