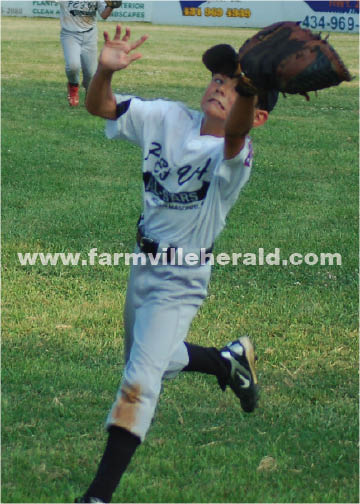 DILLWYN – Big defensive plays and production from the bottom of the line-up. It's been a reoccurring theme for the Prince Edward Farmville Coach Pitch All-Stars in the Virginia AA Tournament.

Wednesday night's third place game against Brookneal, was no exception. The PE Farmville All-Stars rallied for a 12-11 victory over Brookneal to claim third place, and the state's third bid into the 16-team Dixie Youth Baseball Regional Tournament.

“One thing that benefitted us throughout the whole tournament is that we really didn't know who was going to be the one who would win the game for us on a particular night,” said PEFYA manager Johnny Holman. “The bottom of our line-up has proven to be as solid as the top.”

After putting together a six-run inning in the bottom of the fourth to take a 10-7 lead. Brookneal answered with four runs in the top of the fifth to retake the lead at 11-10. With a player on first base, what looked to be a safe single to left-field was quickly foiled by left-fielder Jake Simon, who fired the ball toward second baseman Matte Kinne, to record the third out of the inning on a force play.

After Prince Edward Farmville tied the game at 11-apiece in the bottom of the fifth on an RBI single by JT Faircloth that scored Michael Dailey, the PEFYA All-Stars came up with another big defensive play to end the bottom of the sixth.

Again with a player on first and two out, Brookneal lined a solid double to the fence. Jordan Johns picked up the ball and quickly fired it into Hunter Gibson, who plays defense as the pitcher. Gibson then relayed the ball to a waiting Faircloth, who put a solid tag on the lead runner to retire the threat.

PE Farmville capitalized on the swing in momentum, and won the game on some aggressive base running. Matthew Wright singled to lead off the bottom of the sixth, and advanced to second when Simon reached safely. A hit by Luke Gee scored Wright, who never slowed down on his run from second to the plate. The throw from the field appeared to beat him to the plate, but Wright slid into home just ahead of the tag to score the winning run.

“Those were some clutch defensive plays that were on the money,” said Holman. “One stopped a big rally by them, and the second put us in a position to do what we did in the bottom of the sixth.”

Brookneal scored one run in the first and five in the second to take a 6-0 lead before the PE Farmville bats finally woke up.

PEFYA couldn't take advantage of first inning singles by Wade Jenkins and Johnny Ray Holman, and it wasn't until the bottom of the second before PE Farmville got into an offensive rhythm.

In the bottom of the second, Faircloth collided with the Brookneal first baseman as he legged out an infield hit. That seemed to wake up the PEFYA All-Stars.

Kinne followed with a single that wound up clearing the bases after the ball got away from the Brookneal defense. Back-to-back singles by Daquan Richardson and Wright set up Gee, who scored Richardson on a fielder's choice and Harrison Jones, who scored Wright to cut the Brookneal lead to 6-4 after the second inning.

After a quiet third inning, Brookneal scored one run in the top of the fourth to extend its lead to 7-4. PE Farmville completed its first comeback with six runs in the bottom of the fourth. Faircloth and Kinne reached base to lead off the fourth.

Faircloth scored when Richardson grounded into a fielder's choice. Wright knocked in Kinne with an RBI single, and Wright scored when Simon reached base. An infield hit by Gee scored Simon, and Gee scored when Jones legged-out a single. A single by Johns scored Jones to give PEFYA a 10-7 lead, before Brookneal answered in the top of the fifth with four runs to take an 11-10 lead which was erased by PE Farmville in the bottom of the inning.

“This team plays with a lot of heart. They're a talented group, but I can't imagine that anybody has worked harder than they have, and they've earned everything that they're getting right now.”

What have they earned? A trip to the Dixie Youth Baseball Coach Pitch (AA) Regional Tournament to be played in Florence, SC, starting on July 30.

PE Farmville will play the North Carolina Champion from Stanley – which is between Charlotte and Gastonia – at 10:30 a.m.

“It's back to three-hour practices each day,” said Holman. “This is an experience of a lifetime for these kids. They could go up through minors, majors and all the way up through the system and never get to do this again.

“We've had parents who have given up a lot. Some have lost money they put on vacations. That's a heck of a commitment on their part.”