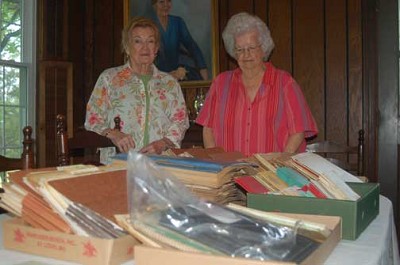 “Eunice Mottley called me recently about all these records of the home demonstration clubs she had collected,” Jane Crute explained.

The Serendipity Club, of which Crute is president, originally was one of the County's home demonstration clubs.

“In 1975 the home demonstration clubs ceased,” Crute added. “The club I was in wanted to stay together as a club, so they called themselves the Serendipity Club.”

It was this link to the home demonstration clubs that prompted Mottley to call the current Serendipity Club president to find a home for her collection of local history.

“When I retired I realized my family wouldn't know what to do with all these records,” Mottley said. “I wanted to find a place for them with an interest in history, some place that would appreciate this information.”

Crute contacted the Farmville-Prince Edward Library who put her in touch with the Library of Virginia in Richmond. A representative of that Library came to Farmville recently to collect an impressive array of items spread across Crute's dining room table.

“They went from one dining room table to another,” Crute joked.

What better place to display the County's history of homemaking than a dining room table!

Dating back to 1915, the collection of handwritten minutes, newspaper clippings, and scrapbooks offer a “history of the homefront” not found in traditional history texts.

“To my knowledge, this information is not available anywhere else,” Mottley stated.

The history of home demonstration clubs in Virginia dates back to the World War I years.

At the outbreak of World War I, greater emphasis was placed on growing and preserving larger quantities of food. Food demonstrations were in great demand. Homemakers wanted to learn the best way to use home-produced foods to feed their families more nutritious meals. 'Food will win the war' became a slogan, and rural families were encouraged to grow and use their own as well as produce extra for sale. (College of the Fields, Virginia Cooperative Extension)

The concept of hands-on demonstrations actually began in 1910 with the “Tomato Clubs” designed to teach girls the art of canning. The 46 girls in the first club agreed to plant and care for 25 tomato plants, then can the fruit. Ella G. Agnew, of Burkeville, was the leader of the project. Even after the Tomato Club project had run its course, Miss Agnew continued to share her skills with local women.

These food demonstrations with a personal touch caught on with local homemakers, and clubs began to organize not only in Prince Edward but also across the state.

“I had 12 home demonstration clubs,” Mottley recalled. “I was responsible for the home economic programs.”

The clubs, which were located in Farmville, Abilene, Mt. Pleasant, Feldon, Jamestown, Green Bay, and Prospect, were organized locally and chose their own officers. Clubs held 10 meetings a year with a picnic in the summer and Christmas gathering in December.

“The clubs organized themselves, but they depended on Extension for the educational programs,” Mottley added.

A committee representing all the clubs met twice a year to plan the educational programs for the coming year.

“Once the programs were planned, they made a yearbook,” Mottley related.

Specialists in various fields would provide the information for each program.

“When we planned programs it was usually in nutrition, home decorating, clothing, or home management – just a wide variety of programs for homemakers,” Mottley said.

During the Depression years of 1930-32, home demonstration clubs helped women use their skills at home to bring in much needed income for their families. Home Demonstration Club Markets were established across the state to allow homemakers to sell produce.

The market was an asset because, while 5% of sales went to pay a manager, it gave farmwomen a source of income. Some reported earning enough to pay their taxes, to make improvements in their homes, or clothe their children. (History of The Federation of Home Demonstration Clubs in Prince Edward County, 1915-1975)

This added income was of vital importance to many local families during the Depression years. An article in the Dec. 20, 1929 Farmville Herald reported, “The Curb Market started early in the year has proved a success. The market is governed by a committee composed of one representative from each of the four home demonstration clubs. A manager is in charge each market day. Sales up to December 1 have amounted to $1,500.”

The markets provided women not only with extra income, but a sense of self-esteem.

An interesting spin off of the markets was that many of the women bartered their produce for medical services, music lessons, and even beauty parlor services. Some women used their sales money to send children to college or to keep them in school. They learned salesmanship, the value of better business methods and records, and how to produce more and better food. (College of the Fields)

During the war years many foods were scarce. Some, including sugar, fats, and meats were rationed; so Extension programs concentrated on stretching these foods. Emphasis was placed on sugar-saving desserts, ways to make available meats go further, and using fewer fats in family meals. (College of the Fields)

Local home demonstration clubs also initiated another project of benefit to the Farmville community: the rest room. Not a “restroom” as we know it today, this was literally a room to “rest” for local farmwomen and their children. While farmers attended to business in town, their families had a place to go.

“The purpose was to have a place for the farm wives,” Mottley related. “When farmers came to town to sell livestock or for whatever reason, the women and their children would have somewhere to be. The rest room was located in the basement of the Court House.”

As Farmville developed into a shopping center and business center for half a dozen counties, a logical outgrowth was a community rest room for women coming to town to shop or work, to visit a doctor or merely wait for a ride home. A matron was on hand to care for babies and small children; the pleasant large room was equipped with chairs, cot, baby crib, a table at which to enjoy a sandwich brought from home, reading material and other comforts for tired or sick women. The home demonstration clubs were instrumental in establishing the rest room, with the cooperation of the county board of supervisors, town council, and the American Legion. (History of Home Demonstration Clubs in Prince Edward)

As early as 1935, over 9,500 people, not only from Prince Edward but the surrounding towns and counties, had used Farmville's rest room. The facility, which the home demonstration clubs helped supervise, was open six days a week and was described as “indispensable.”

Also in the category of indispensable are local histories – such as the one Mottley accumulated during her tenure as home demonstration agent.

Asked how she managed to put these records together, Mottley smiled, “Ever once in awhile VPI would say, 'purge your records.' So I did – I took them home.”

Future generations, now able to access Prince Edward's historical records at the Library of Virginia, will be glad that she did.