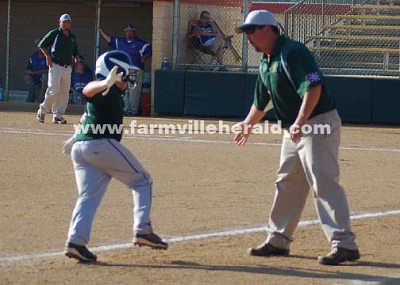 TROUTVILLE – As the No. 3 team from District IV, Buckingham's tenure in the 54th-Annual Dixie Youth Baseball Virginia State Tournament was supposed to be a short one.

Buckingham spotted Lunenburg two runs in the top of the fourth inning, but that seemed to wake up the BC bats. Buckingham responded with five runs in the bottom half of the inning, punctuated by a three-run home run by CJ Ragland.

Christian Williams singled with one out in the bottom of the fourth, and moved to third on a two-base error. A single by Hunter Shumaker scored Williams. A double by Duncan Sinclair put runners on second and third. Shumaker scored on an infield hit by Gray Heslip, and Ragland cleared the bases with a home run over the center field fence.

Buckingham extended its lead in the bottom of the fifth. Jeffrey Craft doubled with one out and scored when Shumaker reached base on an error.

Devin Allen pitched the final two innings and slammed the door on any possibility of a Lunenburg comeback.

“We got our hits when we needed them,” said Buckingham manager Charlie Allen. “We made the most of our hits too. I can't think of a situation that sticks out in my mind where we left runners on base.”

“We've been working with Harley on some off-speed stuff,” said Allen. “It's a little change-up knuckle that he's gotten a lot better at. With it being an elimination game, I wanted to have him pitch the entire game, but I had to switch pitchers after the third. He ran out of gas.”

Buckingham continued a three-game trend of giving up just two runs to its opponent with its most impressive victory of the tournament to date.

South Hill had lost by one run to Charlotte on Tuesday night, and appeared to be one of the three best teams in the tournament.

Buckingham was having none of that. The BC All-Stars jumped on the District II champions early by scoring three runs in the top of the first inning.

Shumaker and Sinclair singled to lead off the game. A double by Gough scored Shumaker, and Ragland backed up Gough's double with one of his own to score Sinclair and Gough.

The damage could've been much greater, but Buckingham left three runners on base.

That didn't matter. Gough picked up where he left off against Lunenburg on Tuesday night. Against South Hill, he had a full tank of gas. He pitched a complete game, and took a perfect game into the bottom of the fifth.

By the time South Hill was able to put a runner on base, Buckingham had built a 7-0 lead.

Sinclair reached on a one-out single in the top of the fifth inning, and moved to third on a single by Heslip, prompting South Hill to bring in its closer. That didn't bother Buckingham, which continued to pass the bat down the line-up. A single by Gough scored Sinclair, and Heslip and Gough were able to move up to second and third on the throw to the plate.

Heslip scored on an infield single by Ragland, and Gough scored on a single by Allen that also scored Ragland on an outfield error by South Hill to give the Buckingham All-Stars a comfortable lead.

With two out in the bottom of the fifth, the heart of South Hill's line-up managed to scratch out a run, but Gough retired the threat when he fielded a pop-up that stranded a SH runner on third.

Buckingham added two insurance runs in the top of the sixth. Jacob Critzer singled and moved to second when BJ Gough was hit by a pitch. Both runners moved around the bases and eventually scored on South Hill miscues. Critzer scored on a wild pitch, and Gough scored on a passed ball that got caught up in the padding behind home plate.

Harley Gough allowed a single run in the bottom of the sixth inning, but with a runner on third and no out, he bared down to get two strikeouts and the final out on an infield grounder.

Gough gave up two runs on two hits in six innings. He struck out eight batters and gave up just one intentional walk.