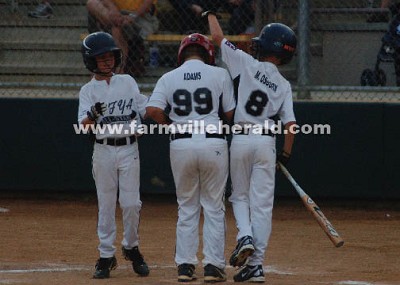 TROUTVILLE – The Prince Edward Farmville AAA All-Stars had a game to remember in the Virginia Dixie Youth Baseball AAA State Tournament. They also had one they'd just as soon forget. PE Farmville defeated Appomattox 16-1 in the tournament-opener on Saturday, but dug too deep of a hole on Sunday in a 23-6 loss to Blacksburg in three innings.

PE Farmville's scheduled Monday afternoon elimination game was moved to Tuesday due to inclement weather in the Troutville area. PEFYA was scheduled to play Powhatan American on Tuesday at 5 p.m.

Prince Edward Farmville jumped out on District IV champion Appomattox with a single run in the first and four more in the second to get a comfortable lead. The PEFYA All-Stars then scored five more in the third and another six runs in the fourth to take a 16-0 lead, before giving up a single run in the fourth inning to just miss out on recording a four-inning shutout.

PE Farmville leadoff hitter Drew Osborn tripled and scored to start the game. Though PEFYA only managed one run in the first, it set the tone for what was to come later.

Austin Mahan led off the top of the second with a single and he later scored, as did Isiah Daily, Andrew Murphy and Cody Kitchen to give PE Farmville a 5-0 lead.

Another five runs in the top of the third blew the game open. Tanner Cyrus singled and later scored, as did Matt Osborn (double), Christian Adams, DJ Williams and Mahan.

Appomattox scored its only run in the bottom of the fourth, but it was not enough to extend the game past the fourth inning.

Against Blacksburg, the PE Farmville All-Stars fell behind 6-0 in the top of the first, but got three of those runs back in the bottom half of the inning when Adams belted a home run over the center field fence. The monster shot scored Drew Osborn and Matt Osborn . PE Farmville was unable to do further damage in the inning, as Dailey and Mahan were stranded on second and third, respectively. Dailey just missed on getting a two-run home run of his own, as the ball bounced over the fence for a ground-rule double.

Cyrus, Matt Osborn and Williams scored three runs in the bottom of the third, but the PEFYA All-Stars were unable to cut into Blacksburg's lead enough to extend the game beyond the third inning.

Adams led the PE Farmville All-Stars at the plate going 2-2 on the evening with the three-run home run. DJ Williams was 2-2 with a run scored, while Terrance Beasley was 1-1.