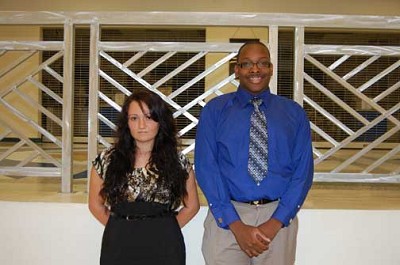 CUMBERLAND – The County's School Board approved the Superintendent's recommendation for two new student liaisons at its June meeting.

The two new student members of the Board, Cumberland High School seniors Christopher Deane and Kelsey Tucker, will begin working with the Board at the beginning of the school year.

Both met with Dr. Griffin for interviews before the end of the school year and were chosen to fill the positions based on their professionalism and High School experiences they have pursued while in the Cumberland County Public Schools system.

According to Deane's resume, he is the Class of 2012 president, Future Business Leaders of American (FBLA) president, SCA secretary and a member of the National Honor Society.

When asked by Dr. Griffin what he'd like to do with his time as a liaison to the Board, Deane noted that he wishes to “open up lines between the School Board, the faculty, staff, and students.”

Some ideas Deane hopes to incorporate while working with the Board include: vending machines with healthy food options, improving the summer reading program, revamping the school's dress code, and expanding the 21st Century Learning Program.

Looking out towards the community, Deane hopes his time on the Board will allow him to work with the Board to host more community events, spread the news going on in Cumberland schools, and expand the parent resource center.

Tucker noted during her interview with Dr. Griffin that she hopes this experience will help her gain experience and obtain knowledge in the education field needed to later acquire her teaching license.

She also wants to utilize her time with the Board by keeping the student body informed of new rules/regulations and achievements made throughout the school division.

“Making the community aware of advantages and prospects to better assist the public's needs and views of the school system,” is also one of Tucker's objectives.

After the liaisons were presented to the Board, Chair Dr. Christine Ross noted that she believes the Board “has great people coming on to work with.”

“This should be a great year for you both,” expressed School Board member George Reid Jr.

The School Board is required to adopt a resolution to use local funds to pay for technology hardware if it plans to seek reimbursement from the Virginia Public School Authority for those items, according to Dr. Griffin.

The resolution must be passed within 60 days of the first purchase and by adopting the resolution at this time will allow the administration to purchase and begin installation of all reimbursable equipment before school starts, she said.

Dr. Griffin recommended that the Board adopt the VPSA resolution VPSA as it was presented in the Board's packet. It was unanimously approved.

Cumberland County Public Schools advisory committees were presented for review during the June meeting as a first read item.

They will be back up for approval in July, noted Dr. Griffin.

After the presentation, School Board member Doris Seal brought attention to the amount of community members identified on the lists. Some of the committees even have student representatives, she noted.

The committees include those for career and technical education, technology, health and special education, and those for federal programs, talented and gifted, capital improvement, the comprehensive plan, and safety.

According to Dr. Griffin, the role of these committees is to review and advise in a “wide range of areas to include course and program offerings, curriculum and staff development, student organizations, and technical updates.

The School Board approved the final payment of bills for 2010-2011 for the school operating budget.

The approval is for those additional bills that are received after the cut-off date and have a payment of a later date to avoid being carried over and charged against the 2011-2012 budget.

The Superintendent recommended that the Board's Chair be authorized to review and approve payment of final bills and payroll so bills can be paid in a timely fashion.

According to Dr. Griffin, a full report will be available for the July meeting.

In other school business, the Board authorized the 2011-2012 local consolidation application for the No Child Left Behind (NCLB) federal funds. The application will be filed with the Virginia Department of Education, said Dr. Griffin.

With the students out of school for the summer, the School Board recognized the volunteers who assist with the division's athletics and within the schools each year.

Those recognized include people from the community who assist with teams, work as mentors within the schools and with teams, bring meals to events, and operate scoreboards and film games, as well as coordinate dismissals and bus notes and assist with kindergarten classes.

Dr. Ross concluded the meeting by addressing the High School's graduation in May.

“It was a real tear-jerker…,” she said about the students embracing Dr. Griffin as they walked across the stage to receive their diplomas. “They were embracing and gave her a hug.”

She later noted the behavior of the entire Class of 2011 and how they were towards their “fellow classmates” even though some had bigger hurdles to overcome throughout their high school careers.