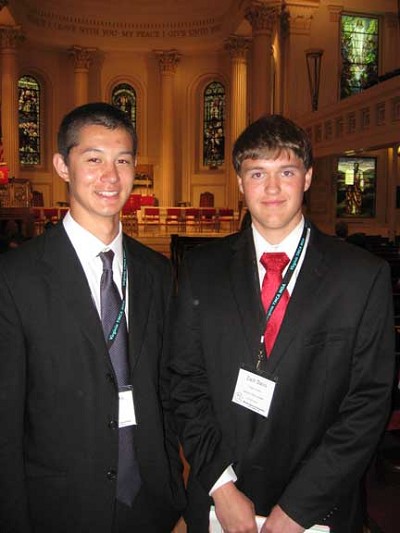 On April 18, students from Fuqua School traveled to Richmond, to participate in the 64th Model General Assembly Program. The Model General Assembly program is designed to introduce high school students to the legislative process of the Commonwealth of Virginia. Legislation is debated in committees and on the floors of the Senate and House of Delegates. This program allows students to play the roles of legislative members over a three-day period. Students serve on committees, patron bills, debate legislation on the floor of the Virginia state capital in either the Senate or House chambers.

Fuqua School had six students attend the young legislative conference this past year where they learned the legislative process and hope to be selected as delegates next year. They are: Colin Ah, Pranay Bonagiri, Whitney Forlines, Peyton Wall, Abby Hatley, and Dallas Powell.

Fuqua School sent eight students as delegates. They are Barrett Maxey, Davis Cyrus, Torey Jackson, Jason Ellington, Brandon Ah, Heather Hicks, Mary Kyner, and Larry Haskins. These students served on different committees and debated legislation brought forth from 60 other high schools across the state of Virginia. This group was very successful and achieved what most schools can not claim, that their bill passed both houses and was signed by the youth governor and will automatically roll over to the uncoming General Assembly.

One of the two bills taken by the delegation, HB20 a bill to allow hunting on Sundays was patroned by both Colton Hanks in the senate and by Davis Cyrus in the house and would pass both bodies and was signed. Caroline Wiles was selected this past year to serve in the role of Clerk of the House. The Clerk serves as the "secretary” of his/her chamber, reading the calendar, keeping track of bills and amendments, and reading amendments as they are submitted. They work under the direction of the House Speaker.

Serving in the senate for Fuqua School were Genevieve Herdegen and Colton Hanks. Zach Davis served as the Senate floor Leader. Floor Leaders work in tandem with the presiding officer of his/her chamber to monitor the flow of debate. He/she is responsible for making most of the motions on the floor of the chamber and is an experienced MGA participant.

While at MGA this year, Fuqua School had two students that decided to run for office. In order to run for office a student must be a junior, fill out an application, and submit a campaign speech along with being in good standing at their school.

Both students gave their speeches in the primary for the Central, Southwest, and Valley districts of Virginia and both students won their primaries which qualified them for the final election. Zach and Brandon again gave their speeches before over 600 hundred students from Chilhowie to Tangier. During the closing session held at Saint Paul's Church, it was annouced that both Brandon and Zach won and would serve next year. They were sworn in by the chief justice of the Virginia Supreme Court and recieved certificates of their offices by Matthew Abell, head of the state board of elections.

In the 64 year history of the MGA program no one school has held both of these elected positions. “It is a great accomplishment for these young men as well as for Fuqua School,” a spokesperson said.