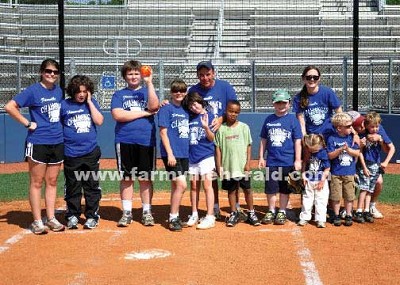 Farmville Challenger Baseball, a team/league for children with disabilities, played its end-of-the-year game on Saturday at the Longwood University softball field. The game was followed by an awards ceremony and an ice cream party.

The league was founded by Matt Lucas, an assistant professor in the Department of Health, Athletic Training, Recreation, and Kinesiology at Longwood University, three years ago plays most of its regular-season games on the softball field at Cumberland High School. Helping to make the league a success this year was Amy Scott, Brittany Long and Stan Montgomery, along with the parents, and most importantly, the players, who are pictured above.

PUT ME IN, COACH – An eager-to-pitch Challenger approaches the pitching circle shortly after the team picture was snapped.