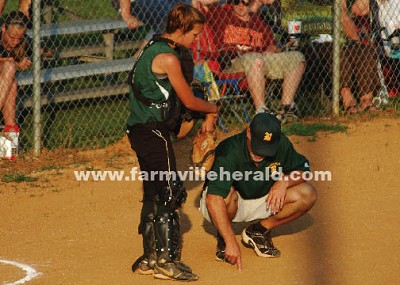 APPOMATTOX – Though there are rare exceptions, by the time most region tournaments get to the semifinal round, most of the teams are pretty much even.

That was the case in Wednesday's Region B, Division 2 Softball Semifinal contest between No. 3 seed Buckingham and No. 2 Appomattox.

Both teams traded for most of the game. Appomattox landed one more punch for a 2-1 victory.

“We knew we were going to have to play our best today,” said BCHS head coach Larry Morris. “If we did, we had a good shot at winning. We didn't do that. We'll credit Appomattox, and take some blame as well.”

Things started well for the Lady Knights, who scored their only run in the top of the first inning.

Mackenzi Crump walked and moved her way around to eventually score on a single by Libby Morris. Buckingham, which had runners on second and third with only one out, couldn't get anything else across the plate.

Appomattox, which is still coping with the tragic death of former standout pitcher Rebecca Almond last week, responded in-kind in the bottom half of the first.

Rachel Mayberry walked to lead off the bottom of the first and scored when Heather Mayberry reached base on an error. The Lady Raiders advanced a runner to third with only one out, but could do no further damage.

Libby Morris had trouble finding the strike zone in the early part of the game, but was able to stay out of trouble until the bottom of the third with two out.

Mayberry drew a two-out walk, stole second and came around to score what turned out to be the winning run on a double by ACHS pitcher Jessica McCormick.

In the circle, McCormick retired 15-consecutive BCHS batters until Robyn Davis reached base on an error in the top of the sixth inning.

She moved to second when Chelsea Shumaker drew a walk, but McCormick was able to get Morris and Sierra Coleman to fly out to retire the side.

Morris was able to get out of a jam in the bottom of the fifth, and skated through the sixth inning with little harm to give BCHS one more chance.

Morgan Huddleston singled to lead off the seventh, and was lifted for a pinch runner. Katelinn Allen followed with a single, but a base-running error between second and third truncated the Lady Knights' chances at a late rally, as McCormick retired the last two BCHS batters to take the victory.

“We had our opportunities to get a run in the sixth and seventh, and didn't get it done. You just can't make mistakes at this level. Teams are just too equal.”

Crump scored the Lady Knights' only run on the afternoon. Robyn Davis reached base twice on errors, while Morris (1-3 RBI), Huddleston (1-3), and Allen (1-3) each collected hits.

McCormick (1-2 RBI double, walk) recorded the only hit off of Morris on the afternoon. In the circle McCormick gave up one run on three hits, walked two and struck out 11. Morris gave up two runs on just the one hit, but walked five and struck out four.

“If you would've told me two months ago that we would be playing Appomattox for a chance to go to the State Tournament, I would've taken it. The young girls really came around as the year went on, and it came down to a play here or a play there.”

“We lost three games there, and we really didn't know what direction we were going to go in. It could've gone either way, but something just clicked, and they started believing in themselves, and for the last three or so weeks, we played some very good softball.”