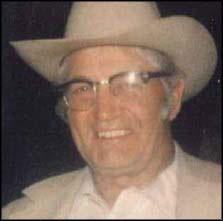 A former cowboy and competitive bull rider, he spent his later years as a cattleman, and was the first to bring Texas Longhorns to this area. At the age of nine, he got his first job riding fences on the King Ranch in Texas. From that time on, he nurtured a dream to breed and raise his own herd of Texas Longhorns, which he saw to fruition, with widely sought WD Longhorns ranging from the Southeast to California. He was a member of the Texas Longhorn Association.

Known for empathy and expertise with all creatures great and small, he was respected and revered for his skills and knowledge. The quintessential gentleman and cattleman, his love for his Longhorns was surpassed only by his love for and devotion to his beloved wife. He is preceded in death by a son, Robert Wayne Lawson Jr.

Mr. Derey is survived by his wife of 28 years, Betty W. Derey; a daughter, Margaret Gail Lawson; three grandchildren, Lisa Lawson Morgan, Bobby Lawson, and Jessica McEver; four great-grandchildren, and honorary “daughter”, Aurelia Covington Boyce, as well as friends, far and near, too many to name, but all loved.

The family will receive friends from 6 to 8 p.m., Tuesday, May 10, at the Joseph McMillian Funeral Home, Blackstone.

Funeral services will be held at 2 p.m., Wednesday, May 11, at the funeral home chapel. Burial will follow in Lakeview Cemetery.

Registry and condolences via www.mcmillianfuneralhome.com

Joseph McMillian Funeral Home, Blackstone, is in charge of arrangements.