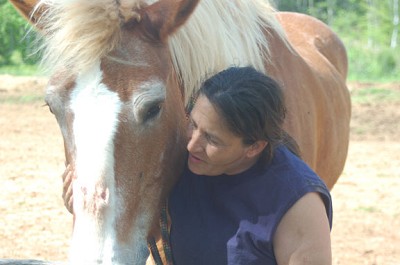 A large sign posted on the fence in front of Karen Cooper's farm in Meherrin reads: Safe Haven Horse Rescue. To the starved and abused horses who find their way here it's more like Horse Heaven.

Originally from “up north,” in New York, Cooper rescued her first horse in 2000.

“I had just bought a farm and a friend of mine asked me if I would rescue a horse,” she recalled. “One went to two, and two went to three . . .”

Cooper called her farm in New York “Safe Haven,” and she brought the name with her when she moved to Meherrin about five years ago.

Before that first horse rescue, Cooper was more familiar with dogs and cats than large animals.

“I used to be a vet tech and had my own mobile grooming business,” she related.

Now a disabled veteran, Cooper stays on the farm “24/7” and cares for her animals – dogs, cats, two goats, a donkey, assorted barnyard fowl, and horses and ponies.

“I rescue just about anything,” she smiled.

“When we first moved to Meherrin we had two cockatoos,” she noted. “We rescued them from a drug house.”

As a result, the birds had rather colorful language.

“Every time those birds screamed the neighbors came running with the police,” Cooper said. “I'm not sorry they're gone.”

Cooper and her 17-year-old son primarily provide care for the current count of 16 horses; one more was scheduled to arrive that night.

“It helps that I'm here all the time,” she said. “The only time I leave is to go to the VA hospital.”

Last year Cooper was diagnosed with thyroid cancer and had to have one lung removed. Cooper believes that her disabilities give her a special empathy for injured and abused animals.

“I think that's another reason I do this,” she said. “As much as I help these animals, they help me too.”

At one time she had as many as 32 horses under her care.

Cooper believes that the economy is partly to blame for neglect she sees.

“People have to realize – if they lose a job they need to ask for help,” she stressed. “If they love those animals and can't afford to take care of them then give them up.”

Leaving a horse to fend for itself without food or water is not a good option.

About six weeks ago, Cooper and some friends from the Farmville area went to West Virginia to rescue horses that were more or less left to fend for themselves.

“It was pitiful,” she said. “The Animal Control officer told us not to go over the hill because that's where all the dead horses were. It was like an elephant graveyard.”

Cooper brought back as many horses as she could load.

“Cindy Stein and Lisa Taylor took their horse trailers,” related Cyndi Mann, a friend who helps at Safe Haven when she can. “Catherine Shannon took three of the horses to foster, even though she already has six horses of her own.”

“Patty and her husband help when they can,” Cooper nodded toward a friend who was sitting in her front yard surrounded by German Shepherds.

Like the horses, most of the dogs on Cooper's farm have stories to tell.

As long as she is able, Cooper intends to give those stories a happy ending. Stretching her limited income, however, is a challenge. A good portion of her monthly disability check goes toward horse feed and medical care expenses.

Cooper welcomes assistance in any form.

“I would really like to have the community involved,” she said.

The American Legion in Crewe helped construct several structures for the horses in the pasture, but had to stop when they ran out of lumber.

“Donations of hay are always welcome,” Mann added, taking note of the fact that this is the time of year local farmers are cleaning out their barns to make way for the spring hay crop.

At the top of the Safe Haven wish list is a barn for the horses.

“I really need a barn,” Cooper said. “I just tried to refinance my house again to pay for one.”

Cooper has applied for 501 (c) 3 non-profit status which is pending, and currently has an LLC certificate.

“I can accept donations,” she said. “If they're monetary, I would rather people don't give them to me. They can send donations to Dr. Scarrow (equine veterinarian) or the Burkeville Southern States (for feed) earmarked “Safe Haven Horse Rescue.”

Cooper's statistics for horse adoptions reflect the personal care she has provided for the rescued horses.

“Since I've been here we've found homes for 46 horses,” she stated.

Most adoption referrals are by word of mouth, and no adoptions are allowed during the spring and summer months.

“This is the time of year everybody wants to ride,” she explained. “When it comes fall or winter people may change their mind and not want to feed or care for a horse.”

“I do charge an adoption fee,” she added. “And people who get a horse have to sign a contract.”

Cooper expects prospective horse owners to spend time with a horse before adoption – to see if their personalities mesh.

“I know this may sound silly,” she said. “But it's also up to the Lord. If a horse doesn't like you, something's not right.”

In recent months, Cooper has been seeing a lot of Animal Control officers.

“I'm not really sure why people have filed complaints,” she said. “If someone doesn't understand why a horse is so skinny, my door is always open. My phone number is on the sign out front. I want them to come by and visit, or call me and ask.”

In order to spread the word about the rescue operation, Safe Haven for Horses will have a booth at the May 7 Heart of Virginia Festival in Farmville and will participate in the Crewe Homecoming May 27.

Cooper would also like visitors to Safe Haven for the horses' sake.

“By people coming in here and visiting with these horses they will learn that not everyone is abusive,” she added.

The physical effects of neglect and abuse Safe Haven horses have suffered will fade over time, but the mental scars take much longer to heal.

Cooper spends hours with each horse, patiently offering love along with treats. Like a smaller version of Robert Redford in The Horse Whisperer, Cooper gently lays her face against a horse's neck, offering a silent hug.

“The thing about these horses is, they were once owned by someone who loved them,” Cyndi Mann concluded. “Then they got into an abusive relationship. We just have to bring them back.”

For further information on Safe Haven for Horses call Karen Cooper at 414-4059. Safe Haven also has a Facebook page.