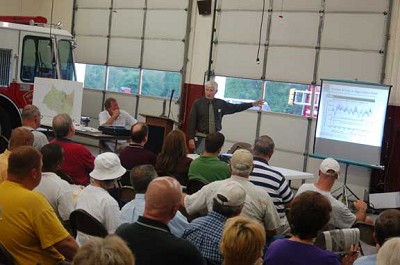 PRINCE EDWARD – County residents interested in chiming in on whether or not Supervisors move forward with a draft comprehensive agreement on a nearly $25 million water project will have an opportunity to have their voices heard.

The Board, meeting last week, scheduled a May 12 public hearing on a possible contract with Crowder Construction Company beginning at 7 p.m.

Still, those who attend or voice support or disdain need not anticipate any action. The board has to wait at least 30 days after the hearing to enter into an agreement should they choose to do so.

The County has available on its website and in the administrator's office copies of the proposed agreement; however, the form could change. Something in similar form was submitted in the interim agreement and Bartlett cited it was moved into more of a “plain English contract.”

Hiring the attorney, Bartlett would later tell The Herald, is to protect the County.

“What you see on the website, we don't particularly like that 'cause…those are standard engineering contract forms and, of course, they're written from that perspective so we want a more plain language and with items in there that aren't in there now that would protect the County,” he told The Herald.

“…This is only a draft,” Bartlett reported at the meeting, later clarifying that the board has not taken action on it at all.

The Sandy River Reservoir, tucked away east of Farmville, is an option the County has been weighing in earnest in more recent years with the submission of an unsolicited proposal. Under the PPEA, or Public Private Education Facilities and Infrastructure Act of 2002, localities may receive unsolicited proposals from private firms-and supervisors agreed to consider the proposal and to look at the specifics of a possible water project as outlined in an interim agreement with the submitting firm.

The agreement, if approved, would include “completion of the design and complete and acceptable construction of the Intake, Water Treatment Plant and Distribution System…”

The design, specifically, factors a two-million-gallons-per-day facility and “alignments that serve from the WTP (Water Treatment Plant) to the east (Crewe area) and from the WTP to the west (Hampden-Sydney area).”

What the agreement does not include and “may be delivered, prepared, or issued” after the effective date of the agreement is a notice to proceed.

Meanwhile, Supervisors continue to get other feedback on the proposed project The board published details of a proposed water project in The Herald last month and are in the middle of holding a series of community meetings in each of the County's districts. The next scheduled meeting is set for the Leigh District on Thursday, May 5 beginning at 7 p.m. at the Prince Edward County Middle School. The last community meeting, for the Farmville Districts, is set for Monday, May 9 at 7 p.m. in the County's courthouse.