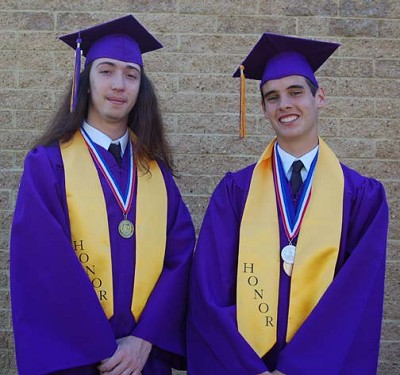 Today, this day, was commencement.

Armed with a hard-earned diploma and a smattering of hopes and dreams, the Class of 2011 was turned loose on the world just before noon.

But not before some words of encouragement.

Hampden-Sydney College President Dr. Christopher Howard encouraged graduates to be themselves and reflected upon showing up the first day of middle school wearing a tie. Dr. Howard, looking back, noted that he wanted to be someone important, someone significant in life, and thought that he should carry himself a certain way and look a certain way-that he needed to be wearing a tie.

He drew from his own personal experiences in the commencement address, encouraging graduates with five “B's”-including being themselves.

He asked them what are they going to do when they're asked.

“…Remember that bald-headed, young, good-looking guy who gave that commencement speech and think, you know what, I'm gonna be myself and I'm not gonna do that,” Dr. Howard encouraged. “Because my life is too important for me to spoil it and to have these things touch it.”

Dr. Howard, who also reflected on joining the ROTC in high school and wearing the uniform, also offered, “I want to be me because I want to serve and I want to give back (because) that's what God intended us to do. Be creatures of empathy, creatures of concern, creatures that want to make the world a better place…”

He also encouraged graduates to be humble, reminding them that no matter how tall their grandfather is, they still have to grow.

Dr. Howard encouraged the class of 2011 to be accountable, reflecting on a question from his Air Force Academy football coach, who asked the team what kind of team they would have if everyone played just like them.

The Lakers last game aside (a blowout playoff loss), he said he wanted them to be like Kobe.

What are they going to do? Dr. Howard asked.

Dr. Howard encouraged graduates to be accountable, not for selfish reasons, but because they want to make this world a better place.

He also encouraged them to be courageous.

Dr. Howard detailed a time when, as an Air Force pilot flying his third solo mission, he had to eject out of a jet and was injured. He noted that he had the option of not flying again, but reflected on those who came before him so he could fly that jet in the Air Force.

The 54th Massachusetts Regiment that had five of Frederick Douglas' sons that fought in the Civil War (an all black unit).

The Buffalo Soldiers who had fought and earned 13 Congressional medals of honor from the Civil War up through World War II. “But, yet when they came back to places like Farmville, or Richmond or Dallas, they were treated like second-class citizens,” Dr. Howard stated.

The 336th Fighter Pursuit Group led by Benjamin O. Davis Jr., the first black to graduate from West Point. Classmates never spoke to him for four years except for official business, Dr. Howard reflected. He commanded a unit that escorted bombers in World War II that never lost a bomber, but came back and was treated like a second-class citizen.

Dr. Howard's father and uncle that fought in Vietnam, both earning Bronze Stars.

“I thought about all those people that had done all those things for me to have the opportunity to fly,” Dr. Howard said. “And I reported…and I said 'Sir, Capt. Howard reports for duty.' Be courageous.”

He offered, “…When somebody's getting picked on, do you step in and say something? When a little person is not being treated properly, what do you do? When you know something's wrong-when you see somebody cheating…doing something wrong, do you step up to the plate? Because I know you all want to be leaders because this is Prince Edward High School, but it doesn't matter if you think you want to be a leader if you're not willing to put yourself on the line and be courageous.”

Dr. Howard also reflected on Gandhi's words, encouraging graduates to be the change in the world they want to see.

Abrams, the Valedictorian of the class and headed to the University of Rochester where he plans to study chemistry, music and Japanese, explained that due to the confusion with their GPAS and shared case of senior-itis, the three decided to get together and write one speech for the occasion.

“…We challenge you to remember not only the successes of your career,” Abrams offered to his classmates, “but also your failures. Not only the time we won the homecoming game, but the years we lost. Not only the test you aced, but also those you bombed-the good times and the bad. The friends you've made and you are departed from…Because success is not gauged from how many 'A's you made, but how many times you failed and stood back up again and gave it another go.”

Aldecoa, who was born in Caracas, Venezuela and moved to Farmville in 2005, plans to attend Virginia Tech and major in civil and environmental engineering.

“Success is different to every person and is reached through the most unexpected of routes, which is what makes it so beautiful. I challenge you to never consider the person you are today to be incapable of solving tomorrow's problems,” Aldecoa offered.

Ms. Brastow, who will attend Davidson College where she plans to major in environmental policy, also offered that they challenge them no longer think locally, but globally.

“Find ways to give back to society that provided these opportunities for us,” she said. “Without the funding that provided for our teachers and materials and facilities or the support from our parents, families and friends, none of us would be here. I hope that you would choose to inspire others as you've inspired me.”

She offered that her hope as the class of 2011 enters the real world is that they would make the choice to view their life “through a new lens-one defined by hope, opportunity, respect, love, joy and peace because each and everyone of you deserves no less.”

Ms. Brastow added, “Continue to realize that, in fact, this life is not always about us and many times, our bad days pale in comparison to the lives of those around us. I hope that you would choose to take on problems, adapting and learning from mistakes, but never changing who you are or conforming to another.”

Abrams concluded, “And most of all, I hope that you would be able to look back on our days at good old Prince Edward and the challenges we shared together and cherish them for what they're worth-the good, the bad and the ugly. I hope that you would smile at the fun times, laugh at the embarrassing times, and be motivated by the bad times. Because combined, these are the things that keep us striving forward on our own paths to success.”

The three presented a gift from the class to Dr. Howard and to retiring Career Tech Center Director Dr. Odessa Pride (who had served as principal prior to the 2010-11 school year). In addition, the class presented a $2,000 check to the high school to refurbish the senior eating area and to use, along with the remaining funds from the class of 2010, to purchase new furniture for the courtyard.

“Today marks the culmination of hard work, dedication, and a commitment on the part of our learners,” reflected High School Principal Craig Reed. “But, more importantly, it is a direct reflection of what a partnership between learners, our parents and the community can do.”

Reed would offer that “we are all aware of the history of Prince Edward County High School and it's distinguished by obstacles but also triumph. Today, our graduating class becomes a part of a grand alumni, but also a new page in that history. And we know that because they come from a school that is marked by a triumph, that they will succeed in every endeavor.”

School Board Chairman Russell Dove offered, “This day is always filled with both excitement and anticipation for it signifies both an ending and a beginning-a beginning that will present itself with many challenges. Challenges I know you have been prepared to only meet, but to conquer.”

Dove also said he hoped graduates would approach their tomorrow ready for greatness, not only in their acts, but in their dreams, plans “and most of all in believing-in believing that you can soar like the eagles that you are.”

Division Superintendent Dr. David Smith told the seniors that they were successful because they set goals and they let nothing stand in their way in achieving those goals.

“You're successful also because of the tireless efforts of your teachers, staff members, your parents, your family members and your community,” he told them. “Look around the room today; you see the most important people in your life. Treasure those relationships, nurture them and protect them. They'll guide you in your journey.”