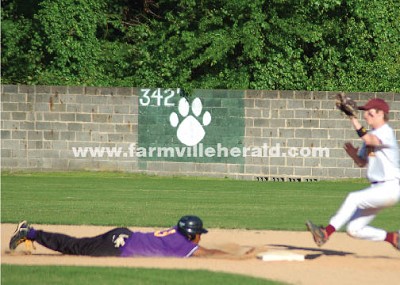 Prince Edward pitcher Chay Fitts took what some would call a hard-luck decision in what was a complete-game loss.

“Chay pitched a heck of a game,” said PE head coach Michael Weaver. “It's a shame. Our defense had trouble behind him in spots, and we couldn't get a lot going on offense after the first two innings.”

The afternoon started off pretty well for Prince Edward, as the Eagles scored a pair of runs in the first and another two in the second to take an early 4-2 lead.

In the top of the first, Prince Edward (6-9, 4-5 SSD) got on the board when Jacob Jamerson was hit by a pitch and then stole second and third. He came home on a Noah Bowman single, and Bowman scored on a two-out double by Darius Ford.

Fitts and Joe Gills drew walks and scored when Austin Reames, who was injured on a defensive play in the fourth inning, reached base on an error. Nottoway answered with a solo home run in the home half of the second inning to cut PE's lead to 4-2, but following a Nottoway pitching change, both teams settled down in the middle innings.

The Eagles held onto their two-run lead until the bottom of the fifth, when Nottoway scored four times to take a 6-4 lead. Fitts gave up two doubles, and three runs came across to score on consecutive Prince Edward infield errors.

The Eagles went quietly in the sixth, but scored twice in the seventh to tie the game at six.

Nottoway held PE scoreless in the top of the seventh, and following a pair of strikeouts by Fitts, scored the game-winning run on two base hits to take the victory.

“Austin's injury hurt,” said Weaver. “He's a key player. We have players who can come in and play, but I think when it happened was just as big a determining factor. Still. You can't take anything away from Nottoway. They played a good game, got timely hits and made the plays they needed to make. Their third baseman had a couple of nice stabs on plays that had a good chance on getting through.”

Jamerson was 1-2 on the afternoon with two runs scored. He was hit by a pitch twice. Bowman was 2-4 with a run scored and two RBI.

Fitts tossed seven innings, struck out 12, walked none but gave up 14 hits. Prince Edward's defense was charged with five errors on the afternoon.

“We're still in the hunt for a playoff spot, though this one would've helped our cause a lot. It's harder now, but we do have some winnable games ahead.”