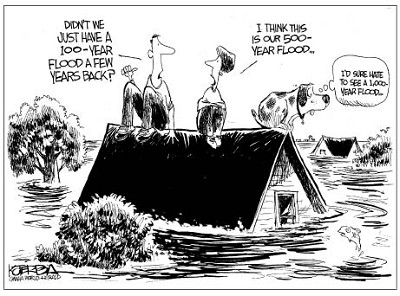 There are 35 state parks in Virginia and six of them are in this newspaper's coverage area: Bear Creek, High Bridge Trail, Holliday Lake, James River, Sailor's Creek Battlefield, and Twin Lakes State Parks. And three of them are in Prince Edward County.

A whopping 17 percent of Virginia State Parks are right here in our area community, a fact that takes on even more significance when one considers what a positive impact state parks have on their communities.

Those six state parks are a blessing, both fiscally and physically, keeping our minds and bodies, along with the economy, in better shape than they would be without them.

According to the Department of Conservation and Recreation's 2010 attendance and economic impact report state parks have seen numbers rise at a record pace across the Commonwealth. Statewide attendance grew by seven percent last year, topping the eight million mark for the first time. The economic impact of those visitors was estimated to have been $189 million, a substantial increase over the $175 million in 2009.

That is a total six-park estimated economic impact on our area of over $11 million.

2011 marks the 75th anniversary of the Virginia State Parks and our state was the first in the nation to create a system of state parks. In his 2010 year-end report, Joe Elton, Director of Virginia's State Parks, states that 75 years ago the parks system was planned to be “an economic stimulator. They believed that if they built proper facilities and showcased Virginia's rich natural and cultural treasures people would travel to Virginia and their outdoor recreation and tourism spending would benefit state and local economies.”

The House of Delegates and State Senate have annually appropriated some $16.5 million for Virginia's state parks system for operating costs, an appropriation that has “reaped a 10 to eleven-fold return on investment with economic impact in 2010 at about $185 million,” Mr. Elton proclaimed.

“You don't have to be Warren Buffet,” he continued, “to know that a ten-fold return on an investment is a good thing.”

A ten-fold return is a huge economic benefit buffet, and it's good to be able to help ourselves by taking best advantage of the six state parks that we can call part of our home here in Virginia. There are creative ways to leverage these assets, to market them and increase the number of visitors in Buckingham, Cumberland and Prince Edward/Farmville.

Outside dollars brought inside our economy are two to three times more powerful economically, an infusion of new economic “blood” that circulates to our mutual benefit. These dollars, crucially, help improve the quality of life of those it helps employ, serve, and educate, along with their families.

The economy is about people. The true bottom line is comprised of human beings who see a better life for themselves and their children when the economy is strong. These state parks are tools we can better use to build the best future.

Virginia Governor Bob McDonnell stated his belief that “the economic impact of this many visitors in our state park system can't be over-emphasized. State park visitors contribute to local and state economies when they buy food or camping supplies, when they visit local restaurants, shops and attractions, and when they buy gas during the drive. From rural areas of Virginia to major urban areas, all Virginians benefit from attendance at state parks.”

Just wait. We ain't seen nothing yet.

When High Bridge Trail is able to open High Bridge, itself, the sky above the Appomattox River Valley in Cumberland will be the limit, if we all work together to do our part.

'Fixing It' Can Be More Trouble Than Necessary