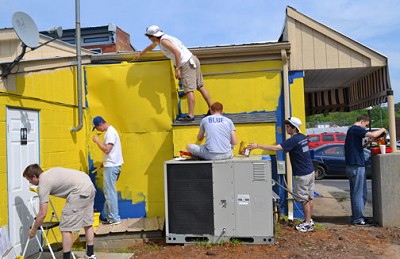 FARMVILLE – Downtown Farmville continues to make strides in their efforts to make our downtown district more inviting and enjoyable.

With May's Open Mic night being the second presentation on the Crute Stage, sponsored by Downtown Farmville, Buffalo Creek Guitar Co. and Real Living Cornerstone, “our efforts in bringing a variety of community events to downtown are becoming a reality”, stated Chuck Ross, Vice-Chairman of Downtown Farmville.

“Our Promotion committee has been working diligently to make plans and lay the groundwork to make this happen”, continued Ross.

Earlier this year a very successful and well-received “Downtown Forum” was held at the train station for all downtown merchants and property owners. This forum was an opportunity to share the vision and goals of Downtown Farmville with those who will be impacted the most by what transpires. A great deal of enthusiasm and encouragement was received from those in attendance.

“We have several citizens who are serving on our committee and are volunteering their knowledge and expertise in lending assistance to our downtown merchants and property owners, free of charge”, continued Johnson. With the final phase of the Streetscape project by the Town of Farmville starting any day, the group is working to encourage the businesses that are part of this project area to improve the appearance of their buildings.

“The street can be beautiful, but if the storefronts that face the street are not attractive, then the impact of the improvements will be lost”, stated Johnson. “One of the greatest services and opportunities we have is the guidance of not one, but two local architects”, Johnson added.

“Through the dedication and commitment of our volunteers we are working toward the goal of an enhanced downtown. Downtown Farmville is striving to gain the cooperation of everyone in making downtown a destination in and of itself”, continued Johnson.

After months of planning, the first large design assistance project has been completed. As spring emerges so has a transformation in color of one of Farmville's oldest and most enduring establishments.

With the assistance of the brothers of Theta Chi fraternity at Longwood University, Walker's Diner has been transformed with a fresh coat of bright yellow paint and white trim. The success of this transformation was no easy feat in these times of economic struggle and downturn.

Thanks to the efforts and assistance of Downtown Farmville, the Theta Chi brothers came together to create this change on North Main Street. Through the guidance of the Design committee this project was completed during the weekend of April 22-24th. With the suggested color transformation from a deep royal blue to a bright golden yellow and white, the diner has taken on a fresh, more vivid spot on Farmville's Main St.

“Oh, what a difference just a coat of paint can make”, stated Arlene Mosher, owner of the diner. “I had no idea such a transformation could be made in just a few days time”, she continued, while preparing sandwiches and milk shakes for the hardworking labor force consisting of nearly 2 dozen brothers from Longwood's Theta Chi Fraternity.

“One of the greatest assets we have to assist in our efforts is the enthusiasm shown by the students at Longwood. By taking advantage of this enthusiasm, the brothers of Theta Chi made a commitment to take on the painting of the diner. With the cost of labor being one of the greatest expenses in many jobs, the time donated by these fraternity brothers was invaluable to this project”, concluded Johnson.

Theta Chi is a social fraternity consisting of over 60 brothers and is recognized as the largest fraternity at Longwood University and can also boasts of having the highest GPA of any fraternity on campus.

“My brothers and I have had a great weekend assisting Downtown Farmville and Walker's Diner in making this transformation possible”, stated Matthew Froestad, community service chair for Theta Chi. More volunteer involvement is anticipated in the coming ahead.