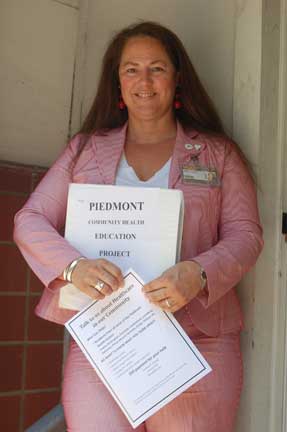 As a nurse, Justine Young has witnessed first-hand what cancer can do to both patients and their families. Now she is trying to find ways to help. Young is heading a two-year project in the Piedmont Health District aimed at reducing the incidence of and death from cancer in the local area.

“I started by gathering demographics and statistics about the mortality rates and the types of cancer here,” she added. “Then I moved into interviewing facilities like home health agencies and hospitals. Next I interviewed 'key physician leaders' who had some significant role in the community.”

The major focus of this study is in gathering input from the people who live in each region of the health district.

“What I'm doing now is focus groups,” Young explained. “Each group has eight to ten people both from the general population as well as cancer survivors.”

“If your husband or your wife or any other family member had cancer and you were involved in their care, you're a cancer survivor,” Young said.

As an added incentive, each person who participates in a focus group will receive a payment of $50.

A focus group session takes about one-and-a-half to two hours and includes a number of questions.

“The questions (for cancer patients or survivors) cover things like how did you get diagnosed, where did you go for treatment, what barriers did you have to treatment – such as you couldn't afford treatment or couldn't get to MCV or UVA,” Young related. “The whole group or anyone in the group can answer or they can choose to skip a question, too.”

Input from the general population, those who have not had cancer, is also needed.

“We need to see how the general population perceives things, too,” Young added.

In each focus group Young tries to get a mix of ages, ethnic backgrounds, education, and income that reflect the community.

“One thing that came out of the first focus group is that the younger people – and by that I mean 20s and 30s – never talk about health issues,” Young related. “Also, a lot of people in the group answered that when it came to having tests they'd rather not know.”

This led to some early insight in the study.

“So for these people, if they don't know, it will go away,” Young commented. “They truly have that mind set. We're wondering, did they not realize that if they find cancer soon enough it is treatable? Just minor surgery or treatment would take care of it.”

“One young lady in the group found out last December that she had diabetes,” Young said. “There was no family history of diabetes. This young lady realized she had done this to herself. She lost 50 pounds just by not drinking sodas. Now she's doing things differently.”

Another education issue was related to smoking.

This type of information is exactly what the focus group is designed to disclose.

“We're trying to find out why the statistics are so bad,” Young noted. “Is it diagnostic? Is it lack of physician availability? Is it lack of education? Is it diet? Is it because so many smokers are here in this area? We're looking at all these factors.”

Interestingly, many people still stick with the old stand-by – “it must be in the water.”

“During the physician interviews Dr. Taylor told me something that surprised me, even as a nurse,” Young said. “He told me that 95 percent of all bladder cancer is directly associated to cigarette smoking. Another doctor told me about having three patients with bladder cancer at the same time. All of them believed 'it was in the water' – but all three of them smoked.”

Collecting this type of information should provide answers, answers that will ultimately lower cancer statistics in the Piedmont Health District. A primary goal of the cancer assessment is to mobilize resources into the Southside and Southwest counties to address the needs identified.

“I've only done one focus group, but by the time I do 12 more of them I should know a whole lot more about the community,” Young concluded. “The goal is to come up with grants to combat what I identify in the end.”

For more information on the Cancer Assessment Project or to participate in a focus group contact Justine Young at (434) 414-3036 or jayoung@vcu.edu. Participants, who must be 18 years old, will receive a payment of $50.