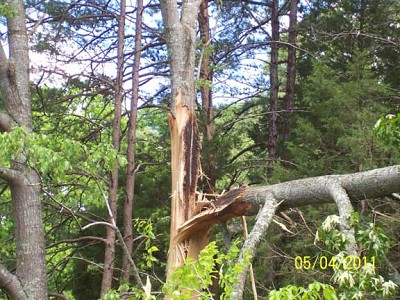 Ron and Patty Gulick, of Shady Acres Farm in Prospect, are thankful for the help of local firefighters and neighbors when lightning started a fire in their basement earlier this month.

“The lightning strike started on the large oak tree at the back of one of our goat pastures approximately a quarter mile from the house,” Mrs. Gulick explained. “The initial connect exploded pieces of the oak tree larger than 2 x 4s that ended up landing 30 feet away in several cedar trees. It then connected with a high tensile electric fence and traveled until it hit the goat barn where it exploded the light fixture on the outside of the building. It continued inside the barn and exploded the fence charger separating its outer cover that landed on a floor covered with hay. The force of the strike didn't stop there. It continued to the house where it traveled inside under the basement, setting several wires on fire that ignited with the insulation under the house.”

The lightning finally stopped in the couple's dining room upstairs.

“The lightning finished its path inside our home with the electrical outlet in our dining room, knocking out both electricity and phone,” Gulick related. “I knew immediately when it hit that it was on us. Instantly, our smoke alarms went off in the house. At the time of the storm I (Patty) was alone. I smelled the odor from the electrical fire and took a flashlight outside to look for it. When I rounded the house I could see flames burning under the kitchen floor, coming from our basement door. I ran back to the house to dial 911 when I discovered the phone was not working. I grabbed two small fire extinguishers we keep in the kitchen and returned to the basement. I emptied both on the fire and returned to the house to let all the dogs loose, grab my car keys and go for help. I had to drive to our nearest neighbors, John and Nancy Mottley, about three quarters of a mile, and have them call the fire department.”

Mrs. Gulick wasn't sure what she would find when she returned to her home.

“When I returned to the house I wasn't sure if it would be engulfed in flames or not,” she related. “I didn't know where exactly the fire had started. I stopped by my husband's workshop and grabbed two more extinguishers. Luckily, the first two extinguishers did their job. The Prospect Fire Department arrived in record time. I thought it would take forever, but the first responders were there in five minutes.”

Due to quick action by all those involved, the Gulick's story had a happy ending.

“I was overwhelmed with everyone's generosity and support,” Patty Gulick said. “We feel truly blessed to have survived such a direct hit from Mother Nature with very minimal damage. We would like to take the time to thank the Prospect and Pamplin Fire Departments. They stayed with me and the house until there was no more threat of fire. We found out through the evening that many of them are all our neighbors.”

“We are very fortunate to live in an area with such great people,” Mrs. Gulick concluded. “Thank you again to all the volunteers in Prospect and Pamplin that came to our aid.”