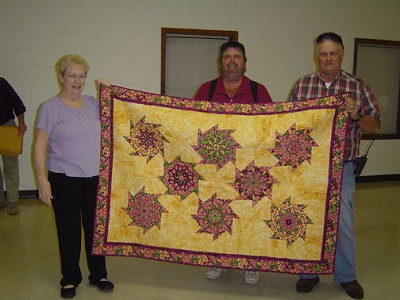 When a fire destroyed Judie Phelan's home on Hardtimes Road last August she might have walked away. Instead, she picked up the pieces.

Judie is a quilter. Recently she presented a quilt to each of the four fire departments that tried to save her home.

“Everything was so surreal that day,” she recalled of the August 16 fire last summer. “Men were going everywhere to try and control the fire.”

When Judie went home that morning after running a few errands everything was fine.

She had dropped one dog off to be groomed that morning. When the fire broke out she managed to save another dog and a cat.

“Two cats died in the fire,” she said.

“I was overwhelmed,” she stated. “There were so many young men there. One young man came out of the house coughing – his air tank siren was going off. I thought to myself, this boy risked his life for me – and he's a volunteer. They were all volunteers.

After the fire was under control another young firefighter came outside to talk.

“When things calmed down a young man from Hampden-Sydney came out to the back yard and sat down with me. He said, 'Can I pray with you?' That really touched me,” Judie recalled.

The local quilter wanted to do something to express her appreciation to the firefighters.

“These people were all volunteers,” she reiterated. “That's when I thought – I want to do something for them.”

Although Phelan was living with a friend, Joan Berry, while her house was rebuilt, she was able to complete four quilts and present them to local fire departments recently.

“I told them that they could raffle them or auction them as a fundraiser,” she noted. “All of the firefighters thanked me profusely. Some of them said things like, 'I wish we could have done more.' They are all very gracious people.”

Phelan's new home is due to be completed any day and she is looking forward to moving in and having her own quilt room again.

“The outpouring of love from the entire Prince Edward community has just been unbelievable,” she said. “After the fire, people I didn't even know were calling and asking what did I need.”

Phelan, who teaches classes at Lib's Place and belongs to a quilt group, The Cut Ups, continues to find solace in her quilts.

“When I go into the quilt room the whole big bad world disappears,” she concluded. “I quilt pretty much every day.”

For a dedicated quilter like Judie Phelan, picking up the pieces is all in a day's work.